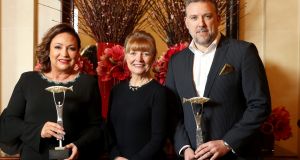 Female philanthropists who want to give their children a sense of the responsibility that goes with wealth and to make them more socially engaged are emerging as key donors to charitable causes, an awards ceremony has heard.

The traditional image of philanthropists as older men is being replaced by younger and more diverse donors, including many young women, according to one of Ireland’s largest philanthropic organisations.

The Community Foundation for Ireland said it was witnessing the emergence of families as donors, including women from all walks of life who had wealth and who wanted to ensure their children were aware of the responsibility that came with it.

Notions of “armchair philanthropists” – predominantly male and engaging in philanthropy in the later stages of life – were changing, it said.

The organisation says women were also “key decisionmakers in their family’s philanthropy; with a particular interest in the idea of family legacy and in engaging the next generation”.

The foundation says that, in general, female philanthropists tend to be more “hands on” when it comes to giving and want to get to know the causes and groups they are supporting.

Two of its funds were established by women who benefitted from a windfall – in one case through inheritance and in the other from the sale of a business.

In another case, a professional woman has set up a fund with a female relation to support a number of projects in the areas of early childhood education, and literacy and numeracy.

Another female-led family fund has chosen to give significant support to the Irish Hospice Foundation’s nurses for their night-care programme, because of personal experience with the hospice.

Businesswoman Norah Casey was presented with the organisation’s National Philanthropist of the Year award at the Shelbourne Hotel in Dublin on Thursday.

The annual awards recognise “extraordinary leadership” in the area of philanthropy – those who have, through their giving, helped to bring about sustainable social change and given something back to their communities.

Ms Casey was acknowledged for her significant support for a number of charities including the Irish Hospice Foundation, Women’s Aid and Make-A-Wish Ireland. Bord Gáis Energy won the Corporate Philanthropist of the Year award for providing funding of €1.2 million to Focus Ireland to help prevent family homelessness.

The fund’s chief executive Tina Roche said it had promoted philanthropy for almost 20 years and was “really witnessing the emergence of families and entrepreneurs who want advice on how best to give but also how to do it with the highest levels of governance”.

Last year, the foundation and its donors distributed almost €7million to charitable causes in Ireland and overseas and reached the milestone of more than €35 million in grants since its establishment in 2000.