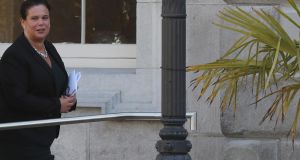 In an interview with the Sunday Independent, Mary Lou McDonald has said the IRA’s campaign was “justified” and, had she been older, there was “every chance” she would have joined. Photograph: Nick Bradshaw

The son of the only Irish Army member to be killed by the IRA during the Troubles has called on the Sinn Féin leader to acknowledge that his father’s death was murder and to instruct any party members with information to come forward.

In an interview with the Sunday Independent, Mary Lou McDonald said the IRA’s campaign was “justified” and, had she been older, there was “every chance” she would have joined.

David Kelly said it was “retraumatising” to read that a potential taoiseach “would have felt the urge to join the illegal organisation that murdered my father”.

Sinn Féin was contacted for comment, but had not responded by the time of going to press.

In the interview, Ms McDonald acknowledged that “all of the acts of violence were awful . . . I do accept that IRA actions hurt and killed a great many people. I also know that actions of state forces and actors and loyalist paramilitaries similarly caused grief and loss.”

Mr Kelly was nine when his father, Pte Patrick Kelly (36), was killed in December 1983. The father-of-four, who was living in Moate, Co Westmeath, was part of a joint Garda-Army operation attempting to rescue supermarket boss Don Tidey, who had been kidnapped by the IRA and was being held in a forest hideout near Ballinamore, Co Leitrim.

Pte Kelly and trainee garda Gary Sheehan died when the gang opened fire without warning. Mr Kelly said his father’s body was “sprayed with machine-gun fire”. Nobody has ever been convicted over either killing.

Mr Kelly said he “totally rejects” Ms McDonald’s “analysis that this was a legitimate war”.

“My father wasn’t in a war, he was doing his duty, and the man who killed my father has never been held accountable for that.”

Families, Mr Kelly said, were “left with no justice. My father was just doing his duty as an Irish Army soldier and his life was just taken, and it ruined many lives. It’s no good just bringing up other cases. Deal with this case.”

Kenny Donaldson, of the victims and survivors group the South East Fermanagh Foundation, said that while Ms McDonald could “sugar coat it with language such as ‘all the killings were awful’”, it was not an acknowledgment of the “illegitimacy of violence”.

DUP MP for East Derry Gregory Campbell said it was “like the old proverb, the more things change, the more they stay the same”.

Ulster Unionist Party leader Steve Aiken said Ms McDonald’s comments were “an insult to all the many innocent victims of terrorism on all sides of the conflict”.