Three men charged with murder of Carlow man in Australia 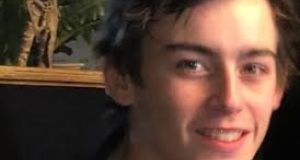 Cian English: died after falling from a balcony on Australia’s Gold Coast.

An Irish teenager who fell to his death from the fourth storey of an apartment on Australia’s Gold Coast was trying to escape being robbed at knife-point, police say.

Three men, aged 18, 20 and 22, have been charged with murdering Cian English (19) who was originally from Carlow.

Officers were called to the foot of the View Avenue building at Surfers Paradise about 3.15am on Saturday after a passerby found the teenager’s body

Police then found a group of teens in one of the units above. Four were semi-conscious after taking prescription drugs which police believe were stolen from Gold Coast chemist shops.

Supt Smith said: “During the course of that the victim has attempted to escape and has gone over the balcony and died.”

The two groups of people were staying in separate units in the building.

The three men who were arrested have each been charged with one count of murder and two counts of armed robbery.

Mr English moved to Australia several years ago with his family.

His family issued a statement on Sunday asking for privacy. “Our family is devastated by this tragedy and respectfully ask for privacy as the police investigation into the circumstances continues,” it said.