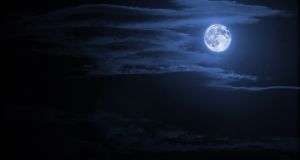 Our nearest neighbour in space has been part of human culture since time immemorial. File photograph: Getty

Reading through Galileo’s work Sidereus Nuncius you get a sense of not just the thrill of discovery, but of a keen eye seeing Earth’s sculpted landscape mirrored in the moon.

We have a chance to explore the lure of lovely Luna ourselves this month when International Observe the Moon Night falls on September 26th.

The harvest moon is traditionally considered to be the closest full moon to the autumn equinox which occurs on September 22nd. The full moon on October 1st has that distinction this year.

Our nearest neighbour in space has been part of human culture since time immemorial. Folk tales explained its phases and dark markings, while some calendars continue to mark time based on the moon’s cyclical changing appearance. Science has changed our fundamental understanding of the moon’s motions, origins and geology, but scanning its surface with a pair of binoculars or small telescope lets us follow where Galileo roamed.

The first thing you will notice is the contrast of light and dark. The bright southern part of the full moon’s disk is heavily cratered, whereas the smoother dark areas are basaltic outflows – these are the “seas” that observers 400 years ago once believed to be bodies of water.

Almost all these features were formed after bombardment by asteroids in our solar system’s early history. Some of the craters such as the 86km-wide Tycho have prominent ray systems because of the impacting body spraying pristine sub-surface material around the general area.

Occasions other than full moon are often the best time explore the lunar surface though. That is because shadows create a dramatic scene. Close to the terminator, or day-night dividing line, is where that contrast is best as the sunrise line slowly creeps across the disk.

At times you will see a crater’s towering central peak and walls catching the first rays of sunrise while its floor is still enveloped by the frigid lunar night. Theophilus is one such crater with a prominent peak that is noticeable even in binoculars.

As the moon waxes and wanes through its phases, you will become attuned to its changing aspect and position in the sky. The height of the full moon each month is the complement to that of the sun for example – when the sun is high in June, the full moon that month traces a low arc across the night sky.

Other times the moon cosies up to a bright planet or star, maybe even briefly hiding them. An occultation is a sudden event because the lack of an atmosphere means a star suddenly winks from view as it is covered by the moon’s limb. Predictions for those occasions can be found at calsky.com

Seeing a thin lunar crescent soon after or before a new moon can be breathtaking. Around those times the rest of the disk is bathed in a faint glow called earthshine. Sometimes called the old moon in the new moon’s arms, it is a phenomenon first correctly explained by Leonardo da Vinci and is due to sunlight bouncing off the day side of Earth on to the night side of the moon. Spectral analysis of earthshine allows us to see the fingerprints of life on our own planet.

It is a technique astronomers’ hope to apply to exoplanets too: by subtracting the spectrum of their parent sun we are left with the chemical composition of a planet’s atmosphere.

How wonderful that so romantic a phenomenon can pay dividends in our quest to discover that we are not alone in the Universe.

Moongazing, by Tom Kerrs and published by Collins (€11), introduces you to all aspects of observing the moon. It features 16 excellent charts with a photograph of the same area on each facing page.

A month on from the Perseid meteor shower and we revisit the constellation again to track down the Double Cluster, a 7,500 light-year distant pair of star clusters.

From a dark site with the unaided eye it appears as a hazy patch midway between the ragged W of Cassiopeia and the head of Perseus. Standard binoculars show the Double Cluster as two adjacent condensations of light, while larger glasses reveal the brighter members. The two swarms are separated by a few hundred light years though and formed only about 12.8 million years ago when a giant cloud of gas and dust collapsed in this arm of the Milky Way.

You might also spot the looser and slightly fainter Stock 2 in the same field of view just north of the Double Cluster. The group is nicknamed the Muscleman after the suggestion its stars trace the outline of a figure flexing its pecs. Just like seeing shapes in the clouds, we can let our imaginations soar through the cosmos on a balmy September night.

The planets for September

Mercury is an evening sky object but too deep in the twilight glow to be seen from Ireland this month.

Venus is a brilliant beacon illuminating the eastern sky in the pre-dawn hours. The planet buzzes the Beehive star cluster (catalogued as M44) in Cancer for a few days mid-month, with the waning crescent moon nearby on the 14th.

Mars is now dramatically bright and pops above the eastern horizon late evening. Its marmalade hue is because a thin layer of dust containing ferric oxide minerals coats the Martian surface, with the atmosphere permeated by that same rusty dust carried aloft. Such an environment will be challenging for future settlers. The moon is paired with Mars on the 5th as they rise together after 10pm.

Jupiter and Saturn are both visible low in the south as twilight fades from the sky. Jupiter is the brighter of the two and resumes its steady pursuit of the more sedate and distant Saturn. The pair appear closest on December 21st when they have a one in 20 year great conjunction.

On that date they are only one-fifth of a moon-width apart which will be a dramatic sight. The moon is close to Saturn on the 25th with Jupiter a little to their right.

Now in the shops are two excellent guides to the night sky for the year ahead. Philips publish Stargazing 2021 by Nigel Henbest and the late Heather Couper, while Collins produce Night Sky 2021 by Storm Dunlop and Dutch uranographer Wil Tirion. Both books are priced at a bargain €10.

It’s rather quiet on the human space-flight front this month but that will change in October when the International Space Station crew return to Earth after being replaced by the next expedition members, along with welcoming an additional cadre of SpaceX astronauts.

The station itself is making a series of morning passes during the first half of September before switching to the evening sky in the latter part of the month. Predictions for your location can be found at heavens-above.com as well as details of those ubiquitous starlinks which are being launched about once a fortnight.

A recent American Astronomical Society report looks at the impact of satellite constellations on observational astronomy and the cultural sky.

John Flannery is a long-time amateur astronomer with an interest in the history and lore of the sky along with astronomical phenomena observable with the unaided eye. He is a member of the Irish Astronomical Society irishastrosoc.org