Six pairs of shoes and 6,000km on British and Irish trek

Three fishermen were rescued in gale force conditions by a volunteer lifeboat crew from the Kinsale RNLI. The 20 metre beam trawler was forced onto the rocks at Moneypoint, at the entrance to Kinsale harbour. Video: RNLI 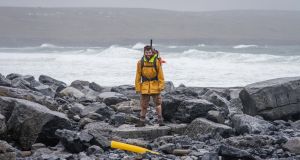 Alex Ellis-Roswell: Walking the length of the Irish and British coastlines in aid of the Royal National Lifeboat Institution. He has already raised €18,000. Photograph: Olga Leszczynska

It will take some 20 million footsteps and about four years and Alex Ellis-Roswell isn’t even halfway there. Ellis-Roswell (23) is determined to pay tribute to his late father by walking the length of the Irish and British coastlines in aid of the Royal National Lifeboat Institution.

From Kent, England, and having just taken delivery of his sixth pair of shoes, he set out on his 16,000km circumnavigation in August 2014. He has completed just over 6,400 km, taking the ferry out late last week to the Aran islands.

His waypoints are RNLI lifeboat stations, where volunteer crew members have offered him accommodation and sustenance. In between, he has slept in church doorways, sheep sheds, bird hides and his tent. “Bird hides in nature reserves are among the best,” he says of the outdoor locations.

He has had some close shaves, however – surviving a herd of bulls up in Scotland’s Mull of Galloway, being locked into a church overnight in Cornwall and waking up in the middle of a dirt bike track where he had camped by accident.

“I’d worked on a sheep farm for four years after I left school, at the age of 14, so I knew that even one bull could kill you,” he recalls of the Mull of Galloway encounter. “I had read somewhere that if you make yourself larger and never turn your back, the bull won’t strike you. I took out my umbrella to make myself bigger and managed to survive seven successive charges, while retreating slowly from the field.”

Ellis-Roswell is taking a clockwise route around both islands, so he took the ferry to Belfast from Stranraer in Scotland last August.

He has had all sorts of company. In Schull, west Cork, the national school pupils walked him through the village, while he marked last Christmas with an Australian friend and vegetarian stew in Baltimore. For his 23rd birthday in Fenit, Co Kerry, he was presented with a chocolate and marshmallow cake. His mother Jackie joined him several months back in Tralee.

He was offered beds for every night of his journey through Clare, while in Kinvara and Galway he was warmly welcomed by sailors and lifeboat crew.

When he rounds the Irish Atlantic rim and heads for Belfast Lough, he will still have much of Scotland and the east coast of England to complete – including the most northerly lifeboat station at Aith in the Shetlands.

He had set an initial target of €10,000, but he has almost doubled it, raising €18,000 for the RNLI to date through online donations and bucket collections.