‘This meant a great deal to Lyra, she would have been so excited to launch its publication’ 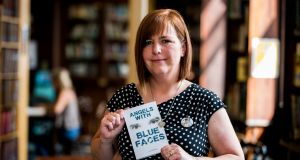 Murdered journalist Lyra McKee had a passion “for bringing the truth out of the darkness”, her sister has said.

Nichola Corner was speaking at the launch in Belfast of McKee’s non-fiction work, Angels with Blue Faces, which was published today by Excalibur Press.

The book is the result of a five-year investigation by McKee into the IRA’s murder of Ulster Unionist MP Robert Bradford and another man, Kenneth Campbell, in 1981.

McKee was shot and killed by dissident republican group the New IRA as she watched a riot in Derry’s Creggan estate in April.

Ms Corner said that even as a child, it was obvious that her sister was “profoundly impacted by and interested in the Troubles, something that is supposed to be over and should have been alien to her.”

She highlighted the parallels between her sister’s murder and those she had been investigating.

“It is like she became the story that she put so much time, energy and thought into researching and writing,” she said.

Ms Corner said she hoped that her sister would live on through her work.

“Yet know that this piece of work meant a great deal to our Lyra, and that she would have been so excited today to launch its publication,” said Ms Corner.

“We, Lyra’s family, are torn between our pride in her achievements and our profound sadness at our great loss.”