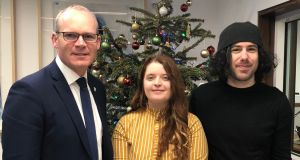 Tánaiste Simon Coveney with Emma DeSouza and her US born husband, Jake. Ms DeSouza has lodged a challenge to a ruling that those born in the North are automatically British citizens. Photograph: DFA /PA Wire

Renewed confidence in the citizenship and identity provisions of the Belfast Agreement is required, Minister for Foreign Affairs and Tánaiste Simon Coveney has said ahead of round-table talks on Wednesday aimed at restoring the Northern Executive and Assembly.

On Tuesday Mr Coveney continued to hold talks with the Northern parties and will travel back to Belfast again on Wednesday to join plenary talks involving Northern Secretary Julian Smith and the five main parties – the DUP, Sinn Féin, Alliance, SDLP and Ulster Unionists.

A number of bilateral sessions involving the parties and the Northern Ireland Office were held on Tuesday as efforts continued to strike a deal before the January 13th deadline imposed by Mr Smith. If there is no deal by then Mr Smith said he is obliged to call Assembly elections, which the parties indicate they would not welcome.

Two days into the negotiations the atmosphere among the parties remained quite positive with one senior talks source saying: “The mood music is still good and this is eminently do-able.”

“People in Northern Ireland have a right to identify and be accepted as Irish or British or both as they may so choose and to hold both British and Irish citizenship, as guaranteed by the agreement. No one should have to go to court to be able to assert that right effectively,” Mr Coveney said.

Meanwhile, two former Sinn Féin Ministers have announced they are to resign from the Northern Assembly, which has not sat for three years.

Former minister for finance and MLA for South Belfast Máirtín Ó Muilleoir is quitting Stormont, saying it was time to hand over to a “newer generation of republican activists” while former junior minister and MLA in Newry and Armagh Megan Fearon is exiting politics to “begin a new chapter in life”.