Eastwood retakes Foyle for SDLP with victory over McCallion 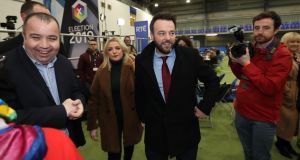 It was billed in some quarters as the election of a generation, and so it proved – though not in the way everyone might have hoped.

In the Meadowbank Sports Arena in Magherafelt in south Derry – a large, draughty aircraft hangar of a hall described as a “freezer” from the victory podium – an early indication of the surprises ahead came from the former Assembly speaker, Willie Hay.

Lord Hay had seen the boxes coming in from Derry and “across the board” they were for the SDLP’s Colum Eastwood – even in predominantly unionist areas. The talk at this stage was of a victory of several thousand for the SDLP leader. And although many questioned how anyone could be so certain that early in the night, privately they conceded that Hay usually got it right.

Get it right he did, though in the event the winning margin was much greater than anyone had imagined. Eastwood retook the seat lost by the former SDLP leader, Mark Durkan, by only 169 votes in 2017 by a whopping 17,110 majority – by anyone’s estimation, a landslide victory.

To have failed to retake Foyle, the SDLP’s cockpit constituency, would have put a question mark over both Eastwood’s leadership and the party’s electoral viability. As it was, the jubilation from the SDLP’s Derry contingent was mirrored in South Belfast, where Claire Hanna chalked up yet another massive winning margin, 15,401 votes ahead of the DUP’s Emma Little-Pengelly, and taking the party’s tally at Westminster from zero to two.

Not a bad night’s work – though, as one SDLP MLA remarked, had they realised they were so far ahead, more resources might have been deployed to, for example, South Down, where the SDLP’s Michael Savage came within almost 1,500 votes of unseating Chris Hazzard of Sinn Féin in what had been thought to be a safe seat.

Postmortems will be under way in the Sinn Féin camp. The party was clearly shaken by the scale of Elisha McCallion’s defeat to Eastwood, and though John Finucane’s victory over the DUP’s deputy leader, Nigel Dodds, in North Belfast gave Sinn Féin a major scalp on the night, the loss of Foyle was undeniably a setback. Coming in the aftermath of poor local election results in Derry and Strabane, it points to problems for the party in the northwest.

Across Northern Ireland, their vote was down by 6.7 per cent while the DUP’s dropped by 5.4 per cent – a sign that voters’ frustrations at the continued lack of government at Stormont were taken out on them at the ballot box.

The DUP would do well to read the warning in the figures. For the first time ever, unionist MPs are no longer in a majority in Northern Ireland, and while party stalwarts like Jeffrey Donaldson and Ian Paisley regained their seats with ease, Alliance – now the North’s third largest party – did well against them, and the Alliance “surge” will clearly have a significant role to play in both attitudes and the political makeup of Northern Ireland in the future.

In all these respects, it was a significant election, yet as the parties, candidates and press waited through the early hours of the morning for the results, the giant television screen in the corner was a reminder of the national reality.

Boris Johnson now has the numbers to make Brexit happen. It is a far cry from the days when the DUP played kingmaker.

The party still claims influence; Gregory Campbell said there would be an “onus” on Johnson to deliver on his promise that there would be “no checks east or west”; his party colleague, Paisley, reminded Johnson that he was the leader of the Conservative and Unionist party. “Let’s find out what that really means with Boris Johnson.”

For veteran campaigner and People Before Profit councillor Eamonn McCann, the SNP’s victory in Scotland held the greatest significance. “It is difficult to see how a referendum [on independence] can be avoided, and it is very difficult to see it not being won.

“The whole constitutional arrangement [of the UK] is going to be thrown up in the air and nobody knows how it will come down.”

In this respect, as in many others, it was the election of a generation.