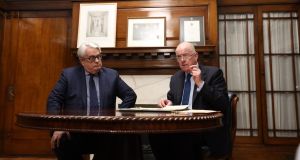 Minister for Justice Charlie Flanagan (right) pictured with Chief Justice Frank Clarke at an event to mark the signing of the establishment of the Judicial Council on Tuesday evening. Photograph: Collins Courts

A large part of the responsibility for the insurance crisis is due to “excessive profit-taking on the part of insurance companies,” the Minister for Justice and Equality Charlie Flanagan has said.

He was speaking in the Four Courts at a ceremony where he signed an order bringing into being the Judicial Council, a body first recommended by an Oireachtas committee 20 years ago.

The council, which comprises all of the State’s judges, will be responsible for handling complaints against judges, producing sentencing guidelines, judicial education and training, as well as the production of guidelines on personal injury awards.

Insurance companies have claimed that high personal injury awards are a major factor in the rise in insurance premiums.

However, Mr Flanagan said: “A large part of the problem is excessive profit-taking on the part of insurance companies.”

Speaking to reporters afterwards, Mr Flanagan called on the insurance sector to “act swiftly” in response to the establishment of the Judicial Council.

“The insurance industry itself has got to give a lead here. Much of the public debate has been surrounding what has been described as a compensation culture. I would have to say a response to what is a challenging issue must be more than just dealt with by the courts.”

There was evidence the insurance companies were making “substantial and handsome profits”, he said.

The insurance industry had been very quick to cite fraud and exaggerated claims as being a factor behind high insurance premiums, he added.

If the insurance companies had evidence of such cases they should hand the evidence over to An Garda Síochána.

Mr Flanagan described the establishment of the Judicial Council as a “landmark moment in the history of our State.”

The Chief Justice Frank Clarke said the first meeting of the council is expected to take place in February and will formally establish the council’s various committees.

The personal injuries guidelines committee has already been established on an informal basis.

“It is worth commenting at this stage that the first meeting of this committee designate of judges occurred on December 2nd, which is eight full months ahead of the mandatory deadline set out in the act for the meeting of the formal committee,” he said.

The overriding function of the council was to promote and maintain public confidence in the judiciary and the administration of justice, he added.

Aligned with the public perception of independence of the courts was a requirement that judges were seen to uphold the highest standards of judicial conduct.

Ethics, impartiality, codes of conduct, and a means to file complaints were all part of the the council’s upcoming role, as well as judicial education and support, and producing sentencing guidelines.

The signing of the order took place in the offices of the Chief Justice, at a table that was used by the three-judge Supreme Court set up in 1924 at the time of the Free State.

Among those present were the Mr Justice George Birmingham, Mr Justice Peter Kelly, Judge Patricia Ryan, and Judge Colin Daly, presidents respectively of the Court of Appeal, the High Court, the Circuit Court, and the District Court, as well as the Attorney General, Seamus Woulfe SC.