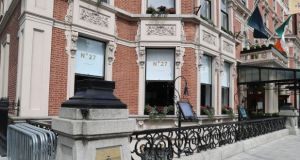 The owners of the Shelbourne Hotel in Dublin have asked for another four weeks to deal with the issue of the statues which it removed, allegedly without planning permission in July.

Dublin City Council has granted the extension, on the basis that hotel management provide a “substantive response” to the alleged planning breach.

The council’s original enforcement letter sent on July 29th stated it believed that the removal of the four statues was an “unauthorised development”.

The four weeks expired on Wednesday without a response from the hotel. They did respond on Thursday stating that the building’s owners are investigating the issue and asked for a further four weeks.

The Shelbourne Hotel is owned by the US multinational property company Kennedy Wilson and operated by the Marriott Group.

Kennedy Wilson told the council the statues were professionally removed and in safe storage.

Dublin City Council’s planning enforcement section has granted the four-week extension on the basis that a substantive response is supplied, “outlining a compliant way of dealing with the issue is received within that timeframe”.

Failure to comply with this will lead to further enforcement action being initiated following the expiry of the four weeks concerned, the council added.

The four statues were removed from outside the front of the Shelbourne Hotel last month.

Hotel management said they took the decision to remove the statutes, which have been in place for 153 years, in light of world events and the Black Lives Matter movement calling attention to the legacy of slavery around the world.

It followed a complaint that two of the statues depicted Nubian slave princesses.

The hotel is a protected structure, meaning changes such as the removal of the statues would require planning permission.

Since their removal, an art historian has said 19th-century documentation proves conclusively that the statues do not depict slave girls.

Kyle Leyden, who is a lecturer in the history of art and architecture at the University of London, says the original catalogue from which the four statues were ordered clearly label them not as slaves, but Egyptian and Nubian women.

Property developer Harry Crosbie, who has one statue of each in Café Bar H in the Docklands, said it is clear that the decorations on their ankles are gold bracelets not slave manacles as has been suggested.

Former attorney general and minister for justice Michael McDowell was one of those who lodged a complaint with the council about the removal of the statues.

He received a response from the planning enforcement department on Friday stating that the four-week period for a response had expired with regard to the warning letter issued.

The email from the council continued: “Consequently the area inspector will be carrying out an inspection in the coming days and will be making a recommendation to the enforcement manager early next week.”

“ The issue is very simple. The people who took down the statues are well resourced and have had more than a month to proffer any defence for their action,” he said.

“It now seems that they have failed to comply with the generous time limit afforded them by the planning authority Dublin City Council.

“They have obviously not regarded the matter as urgent and important. The statues should be replaced immediately and the planning law should be complied with.

“I hope that this saga is not going to be dragged out by a misguided and wrong- headed attempt to seek retrospective retention permission which, with appeals, could last up to a year. “

Nobody from the Shelbourne Hotel responded to a request for a comment.