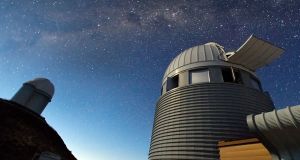 Astronomers based in Ireland will soon be able to participate in frontier research in space, such as investigating the birth of stars and planets, as the Republic has joined the European Southern Observatory (ESO).

The ESO is an intergovernmental astronomy organisation and is the world’s most productive astronomical observatory. Founded in 1962, its headquarters are in Munich, Germany, and it currently has 15 member states. On October 1st, Ireland will be the 16th. Its main work is conducted using a variety of large optical and radio telescopes which are all located in the southern hemisphere, notably in the Andes mountains of Chile.

Speaking at a signing ceremony in Dublin, Minister of State for Research and Development John Halligan said it was “the culmination of significant work by the Government and ESO as well as the Irish astrophysics community”.

As a member of the leading astronomical research organisation in the world, Ireland had an opportunity to gain access to excellent research, innovation, collaboration and industry contracts, he added. “This significant investment in our scientific community demonstrates the Irish Government’s continued commitment to research and development in both our academic and industrial sectors.”

Irish astronomers would gain access to a suite of the world’s most advanced ground-based telescopes, he confirmed. “Furthermore, Irish industrial partners will have the opportunity to be part of the development of ESO’s next generation of state-of-the-art instruments.”

ESO is currently constructing its flagship project, the €1 billion European Extremely Large Telescope (ELT). It will be the largest optical telescope in the world when it becomes operational in 2024.

New member states are required to pay a once-off “special contribution fee” calculated based on net national income (NNI) of the member state and ESO assets. For Ireland this has been agreed as €14.66 million. The Government committed to initiate negotiations for Ireland’s membership as an action under Innovation 2020, the national strategy for research and development, science and technology.

DIAS chief executive and registrar Dr Eucharia Meehan said it was delighted Ireland was joining the ESO and honoured its own astronomer Prof Tom Ray would represent Ireland on the ESO Council.

“Ireland’s membership of the ESO has been a strategic aim of DIAS for many years. Tom is joining the ESO at a very exciting time, when they are building the largest telescope in the world – the ELT. This 39-metre telescope is being built on top of a mountain high up in the Chilean Andes, and is intended to become ‘the world’s biggest eye in the sky’. Tom’s membership of the ESO will ensure Ireland can play a central role in this exciting development.”

Prof Ray said ESO membership was a wonderful development for Irish astronomy and is hugely significant for future generations of Irish scientists. “It means we now have access to world-class facilities and we can lead programmes on such topics as the physics of the gas and dust in our galaxy; the birth of stars and planets; the interaction of black holes with exotic stars in binary systems, and the formation of the first galaxies.”

“Access to the ESO means, from now on, Irish astronomers – as members of a consortium and in collaboration with industry – can be at the cutting edge of astronomical developments globally,” he said.