Carer who stole €2,600 from neighbour in wheelchair gets suspended jail term

Accused had repaid all the money taken using the victim’s Visa card and deeply regrets his action, court is told 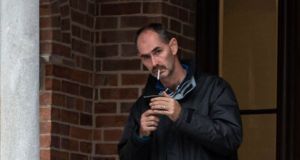 A 52-year-old man, who effectively became a part-time carer for his elderly neighbour, has been given a five months suspended jail term and fined €1,200 after he abused the man’s trust in him by taking his bank card and stealing €2,600.

Gerard Higgins, from Henry Street in Cork city centre, pleaded guilty to a total of seven counts of theft of sums totalling €2,600 from John Buckley (81) on various dates between February and May 2017 at ATMs at AIB Bank and Permanent TSB Bank on North Main Street in Cork.

Today at Cork District Court, Insp John Deasy told Judge John King that Higgins had repaid the stolen money in full and while he had previous convictions for public order matters, they were all historic in nature and he had never come to Garda attention for theft offences before.

Judge King had previously heard from investigating officer, Det Garda Noel Maxwell that Higgins was acting in the role of unofficial part-time carer for Mr Buckley, who lived next door to him and used a wheelchair, and Mr Buckley had come to trust him.

“He knew where he kept his Visa card and also knew Mr Buckley’s PIN number for the card,” said Det Gda Maxwell, adding Higgins took the card from a drawer and used it at the ATMs to take out money from Mr Buckley’s account without his knowledge before returning the card to the drawer.

Defence solicitor Diarmuid Kelleher said his client’s financial circumstances were absolutely dire at the time and he had succumbed to temptation and stolen the money from Mr Buckley but he now recognised the terrible breach of trust he had committed and deeply regretted his actions.

Higgins was currently on social welfare and had been seeking a job but he was neighbours with Mr Buckley and there had been lot of comment on social media by others in the community about his crime and he was now finding it difficult to get work, said Mr Kelleher.

“He was entirely the author of his own misfortune but he has lost whatever status he had in the community,” said Mr Kelleher, stressing that his client had taken it upon himself to repay the money and make restitution in full to Mr Buckley through regular repayments via the District Court Office.

Judge King said were it not for the fact that Higgins had repaid the stolen money in full and the fact that he was treating the thefts as a first offence given the historic nature of his previous offending, Higgins would be going to jail.

“This was a very vulnerable man who placed great trust in your client and that has impacted on his ability to trust others,” said Judge King after reading a Victim Impact Statement submitted on behalf of Mr Buckley by his daughter, Sandra O’Callaghan.

He fined Higgins €200 on six of the seven counts and sentenced him to five months on the final count but suspended it on condition for a period of two years on condition that he be of good behaviour and have no contact again with Mr Buckley.