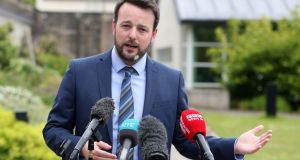 SDLP leader Colum Eastwood has with deputy leader Nichola Mallon written to party members assuring them that any relationship with Fianna Fáil would be for the party to endorse or reject. Photograph: Niall Carson/PA Wire

The SDLP leadership has confirmed to party members it is exploring “co-operation and partnership” with Fianna Fáil and these negotiations are drawing to a conclusion.

The party leader Colum Eastwood and deputy leader Nichola Mallon wrote to SDLP members assuring them that ultimately any relationship with Fianna Fáil would be for the party to endorse or reject.

On Wednesday the leaders for the first time started apprising members of developments in the tightly conducted Fianna Fail-SDLP negotiations. Sources repeated that the two parties remained on track to make an announcement early this year, possibly later this month, about what they characterised as a phased process of integration.

Mr Eastwood and Ms Mallon referred to Brexit and other challenges and said the SDLP had a “responsibility to stretch ourselves beyond our comfort zone”.

“It is this broader context on the island and the ongoing crisis in our politics which has led us to explore co-operation and partnership with Fianna Fáil,” they said.

“Our discussions have been based on how best to meet the challenges of Brexit, how best to restore the institutions of the Good Friday agreement and how best to ensure that our values of reconciliation and the unity of our people can once again enter into the lifeblood of our politics,” they added.

“These talks are coming to a conclusion and we will of course share with you any proposal which emanates from them,” they said.

Following reports in The Irish Times this week about developments in the talks, some party members such as South Belfast Assembly member Claire Hanna and Lisburn councillor Brian Heading expressed reservations about what sources described as a “phased” and “evolving” process ultimately designed to lead to an alliance of the two parties.

Mr Eastwood and Ms Mallon said they “absolutely acknowledge” that considering such change “won’t be comfortable for some and we entirely respect that position”.

They also sought to assure members any final decision will be for the overall party. “We have been clear, the future of the SDLP will be decided by you, the party, our membership. Any fundamental change which we recommend in terms of the future of this party will be brought to you,” they said.

A Fianna Fáil spokeswoman said on Wednesday night it would not be commenting on the talks at this stage.

Explaining the rationale behind the negotiations Mr Eastwood and Ms Mallon said “these islands face the biggest socio-political challenge since partition in the form of Brexit”.

“Businesses, farmers and people right across our communities are left voiceless at a time of great uncertainty. The absence of the powersharing institutions has left our people powerless, leaving our society stuck in a cycle of division and failure. That is the serious context which we have all been left to confront,” they added.

“In order to end this dangerous vacuum, in order to break the cycle of the last two years, it is clear that we need to be willing to embrace change. Continuing on as normal is not an option,” they said.

“Since our foundation the SDLP has led much of the political advancement that Ireland has experienced. We are not prepared to stand aside and allow others to shape a future in their own narrow image. We want to be the leaders of that change again, across the entire island,” they said.

Truck driver loses appeal against cocaine conviction 14:57
Taoiseach ‘shocked and dismayed’ at Sinn Féin TD’s tweet on IRA attacks 15:28
Kerry nursing home closure: ‘It is the lack of information that really upsets us’ 13:46
Irish public pessimistic about a return to normal within the next year 13:42
European court clears way for landmark climate case 13:24