Demand for tickets was ‘way beyond expectations’, organisers say 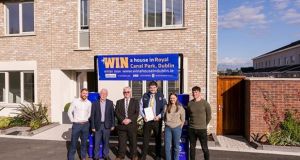 Members of Club Rossie at the Royal Canal Park Development in Ashtown, Dublin 15, where they raffled off a house valued at €425,000.

Roscommon GAA supporters are jubilant after a raffle for a house in Dublin raised just over €1.4 million.

More than 14,000 tickets at €100 each were sold by Club Rossie, the supporters’ club association.

The new three-bed house in Royal Canal Park, Ashtown has been built by Seán Mulryan who is the main sponsor of Roscommon GAA. Similar houses in the development are on the market for €425,000.

The supporters will hand over €943,400 net to the county board once the house has been paid for.

It has been won by Kumar Gangah, an Indian software engineer who lives in Lucan.

Club Rossie spokesman David Leydon said the success of the raffle was “way beyond expectations” and that on average they sold €12,500 worth of tickets every day while the draw was going on.

He added that interest in the house went far beyond Roscommon supporters and that the draw emphasised the attractions of winning a home in Dublin rather than the cause for which the funds were raised.

They sold tickets in every county in Ireland and in 26 countries worldwide. Most of the tickets for the house were sold online.

“We had a super product,” he added, “a new house in Dublin 15. Using digital technology at every stage of the campaign was the key to it. People trusted that we were running it in a professional way.”

Some of the money will be spent on the Dermot Earley Centre of Excellence at Runnabracken just outside Roscommon town. A portion will be used to upgrade Hyde Park to make it fit to hold Connacht finals.

“It is going to set Roscommon a really sound financial footing for the coming years,” he said.