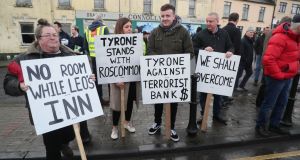 People at a protest in Strokestown, Co Roscommon, against the handling of the eviction of the McGann family. Photograph: Brian Lawless/PA Wire

One member of the family whose Co Roscommon home was seized by KBC Bank is examining whether he has a basis for taking legal action against the financial institution.

Lawyers acting for David McGann are examining whether the bank, and the security firm it employed, may have infringed his rights in evicting him in December last from what was his family home.

The bank was acting on the basis of a possession order issued to it in relation to a debt owed by Mr McGann’s brother, Anthony. The two brothers lived in the house with their sister Geraldine.

The High Court possession order was issued in August in relation to a debt of more than €300,000, following proceedings against Anthony McGann the bank began as far back as 2009.

Public records show that Anthony McGann has had a range of judgment orders issued against him over the years, many of which have been registered against plots of land he owns beside the family home in Falsk, near Strokestown, Co Roscommon.

Lawyers acting for David McGann are examining whether the bank, in seeking to exercise its right to seize the house on foot of an order issued in proceedings against his brother, acted properly in relation to his own rights.

“Even if the house belonged to someone else, it was still his family home,” said one source involved. “You can’t just grab someone by the scruff of the neck and throw them out on the road.”

David McGann has engaged solicitor Donnacha Anhold to examine whether he might have a case against the bank and the security company it engaged to seize the Co Roscommon house.

Video that was posted online of the family being removed from the house caused enormous controversy at the time of the eviction. A number of days later, a gang of masked men beat up members of the security team that were occupying the house. They also set fire to vehicles and caused injuries to a dog, which had to be put down as a result.

The attack is being investigated by the Garda. It is believed it was carried out by local men, accompanied by people from outside the area who may be linked to Republican Sinn Féin.

The attack was strongly criticised by Taoiseach Leo Varadkar and Minister for Justice Charlie Flanagan. David and Geraldine McGann are now back living in the house.

“They were in the house over the Christmas and nothing has happened since they returned,” family friend Donal Hanly said.

Legal sources say the property now belongs to the bank as it successfully executed a valid possession order.

However, lawyers acting for David McGann are examining whether proper procedure was followed in relation to his rights to his family home when the security firm was sent in to take possession of the property.

David McGann could not be contacted and there was no comment from a spokesman for KBC.