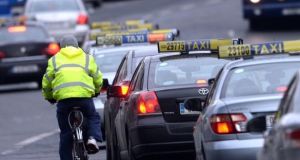 The Bill had proposed setting a minimum passing distance of up to 1.5 metres between a motorist and a cyclist. Photograph: Cyril Byrne

Road safety campaigners have said the Government could learn from the success of British police forces in prosecuting motorists who do not keep a safe distance from cyclists.

A proposed new law that would have set a minimum passing distance for drivers overtaking cyclists in Ireland has been abandoned after the Attorney General raised concerns.

Seamus Wolfe expressed reservations about the enforceability of legislation relating to the Road Traffic (Minimum Passing Distance of Cyclists) Bill 2017.

It had proposed setting a minimum passing distance of up to 1.5 metres between a motorist and a cyclist.

Mr Wolfe’s concerns are believe to centre around the difficulty in measuring such a distance for the purposes of prosecuting motorists.

“The Staying Alive at 1.5” campaign was started by Wexford-based cyclist Phil Skelton in 2013 following the deaths of two cyclists on the county’s roads.

Mr Skelton said he would have been disappointed a couple of years ago if the announcement had been made then but he said he had since learnt of other models which could be effective in protecting cyclists.

In Britain, for example, police have been prosecuting motorists caught driving too close to cyclists. The legislation there does not specify any particular minimum passing distance. Instead, it prosecutes drivers who have not given “due care and attention” to cyclists.

Police forces in the UK have been encouraging cyclists to send through footage taken by bike riders themselves for examination. Many modern bicycles are equipped with Go Pro-type cameras on the handlebars.

Some forces, including Cambridgeshire Police which operates Operation Velo, have sent out plain-clothed officers on mountain bikes with lasers to measure the distances motorists keep from cyclists. The West Midlands Police has taken a similar approach.

In response to Mr Wolfe’s concerns, Mr Ross has proposed a statutory instrument which would make the dangerous overtaking of a cyclist an offence without specifying any particular distance.

“We have been assured that it will be equitable to the other one (Road Traffic (Minimum Passing Distance of Cyclists) Bill 2017). Time will tell. If that doesn’t work, we will have to turn up the volume on the minimum passing distance.”

Green Party transport spokesman Cllr Ciarán Cuffe said he was “bitterly disappointed” by the news that the proposed law has been shelved.

He said the Attorney General had clearly adopted a “somewhat cautious approach to these much-needed changes”.

Cllr Cuffe suggested that in the absence of legislation, the Government should encourage An Garda Síochána to crack down on unsafe motorist-cyclist interactions.

He also suggested the Department of Transport speed up the introduction of infrastructural solutions to segregate cyclist and motorised traffic, particularly in higher speed, congested locations.

Fine Gael general election candidate Deirdre Duffy called for the Greater Dublin Area Cycle Network to be built without delay to accommodate the growing number of cyclists in the capital.

Cyclist.ie spokesman Dr Mike McKillen said there was already a statutory instrument, SI 182/1997 which carries an offence of dangerous overtaking but it was hardly ever used.

“Our gardaí make no use of that which makes us worry about Shane Ross bringing forward a new piece of legislation.”

Cyclist.ie vice-chair Gerry Dornan said minimum distances were not as important as enforcement of dangerous driving.

“The UK have been quite innovative and they prosecute using video evidence. There is no one thing that could be used to solve the problem.”

Figures released by the Road Safety Authority (RSA) show that the number of cyclists killed on Irish road fell from 16 in 2017 to 10 in 2018.

Mr Dornan said the figures had to be seen in the context of the situation at the start of the decade when the average number of cyclist fatalities on Irish roads was half what it was now.