ANALYSIS: result opportunity for Stormont but only if politicians have wit to grasp it 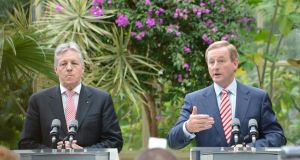 The Scottish referendum result has “neatly set the scene” for St Andrews Mark II talks aimed at resolving the political problems and divisions that are threatening the Northern Executive and Assembly. Photograph: Alan Betson / The Irish Times

The Scottish referendum result has set the scene for St Andrews Mark II talks aimed at resolving the political problems and divisions that are threatening the Northern Executive and Assembly.

The general unionist reaction is one of relief and satisfaction while most nationalists will be disappointed that Alex Salmond couldn’t persuade a majority of his compatriots to break with the United Kingdom of Great Britain and Northern Ireland.

Had that happened it would have prompted unionist anxiety and increased the Sinn Féin push for a Border poll on a united Ireland. That republican demand won’t cease but it will now be easier for the Northern Secretary Theresa Villiers to hold to her line that there is no apparent appetite in the North for such a plebiscite.

The fairly marginal No result has also presented opportunities for Northern Ireland to piggy-back on David Cameron’s pledge of “devo-max” for Scotland. If Scotland is granted additional devolved powers then the cry from the Northern parties will be for more powers for Northern Ireland.

The big focus initially will be on whether the British government now allows the Northern Executive to bring corporation tax here in line with the general 12.5 per cent rate that applies in the South. David Cameron has already promised that he would make a decision on corporation tax soon after the completion of the referendum.

Many economists and most politicians believe that reducing the level of corporation tax from its current general figure of 21 per cent would be a “game changer” for Northern Ireland: it would boost international investment and create thousands more jobs.

There will be a price to pay in that the annual British government subvention of £10 billion will be cut back by about £300 million to compensate the London treasury for the loss in tax.

And if Scotland is devolved some additional tax raising powers then the likelihood is the Northern Executive will issue similar demands - although unionists wary of breaking too many links with Westminster may be more cautious in this area than Sinn Féin and the SDLP.

There is real opportunity here for Northern politicians to have more say over how they run Northern Ireland. The British prime minister today made that clear. “In Northern Ireland, we must work to ensure the devolved institutions function effectively,” he said.

“Just as Scotland will vote separately in the Scottish parliament on their issues of tax, spending and welfare, so too England, as well as Wales and Northern Ireland, should be able to vote on these issues and all this must take place in tandem with and at the same pace as the settlement for Scotland,” added Mr Cameron.

But this all begs the rather large question: who in their right mind would grant the currently pretty dysfunctional Northern Executive such additional powers when according to its First Minister it is “not fit for purpose”?

Nobody expects Mr Cameron to be so naïve when the Executive is bogged down in rows over issues such as welfare reform, parades, the past and flags, the Maze and the Irish language.

So, it’s back to quid pro quo politics. The carrot is the prospect of extra local clout devolved to Stormont; the stick is that Northern politicians have no chance of receiving such additional powers unless they demonstrate that they are actually capable of working together.

Which neatly sets the scene for those all-party talks, also involving the British and Irish governments, that Peter Robinson has been demanding. The First Minister suggested that such negotiations could be along the lines of the comprehensive Scottish St Andrews talks of 2006 that set the scene for the historic power-sharing deal struck by the late Ian Paisley and Gerry Adams in March of 2007. Dublin and London, Sinn Féin and the other parties seem to be gearing up for such negotiations.

After the referendum there is indeed real opportunity here but it is up to the Northern politicians to demonstrate that they have the maturity and guile to seize it.