Samantha Power: I would consider running for public office in US 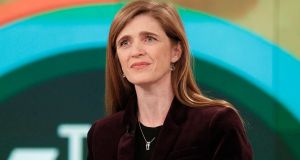 Samantha Power said that she was confident for the future as the election of Donald Trump had resulted in a lot more young people becoming active in politics. Photograph: Lou Rocco/ABC via Getty Images

Irish-born former American ambassador to the United Nations, Samantha Power said she would consider running for public office in the United States or serving in another Democratic administration if the right opportunities arose.

Ms Power, who served as US ambassador to the UN under the Obama administration from 2013 to 2017, said that she believed that she made a contribution to make to political life in the US but her immediate priority was her two young children.

“I would consider running but I would have to find the right opportunity – I have an eight-year-old and a five-year-old who have a claim on me as I had them both while I was at the White House so I’m trying now to make up for lost time,” she said.

“ I would love to run for public office or go back in if the Democrats get back into power but honestly to get up to go to work every day and feel that you can do something to be helpful, it’s what most of us long for – I was just lucky to be able to have that experience,” she added.

Speaking at the Charlie Chaplin Festival in Waterville, Co Kerry, Ms Power said her biggest fear at the moment would be the response from President Trump to any terrorist attack on US soil but she was also confident for the future as his election has had some surprise benefits.

“My biggest fear is that virtually every crisis that every President Trump has been part of it in the last seven month, other than the storm that has hit the US mainland, has been entirely self inflicted and a man made crisis so like every citizen of the world, I am concerned about a real crisis.

“I would be particularly concerned about a real test particularly in terms of a foreign policy issue and a terrorist attack on US soil and what would be done in the wake of that would be terrifying,” she told former RTÉ Washington correspondent, Carol Coleman, in a Q & A session.

Ms Power also singled out President Trump’s recent address to the Boy Scout Movement of America as something very disturbing, comparing what he said to the Boy Scouts to what his predecessor, Barack Obama said to them during his time in the White House.

“President Obama came to the Boy Scouts, he said ‘Look out for your neighbour’, he spoke about teamwork and solidarity – what Trump did was go somewhere much more dark, more political but also create a sense of threat and doom and fear for young boys who are very impressionable.”

However, Ms Power said that she was also confident for the future as the election of Donald Trump had resulted in a lot more young people becoming active in politics with many opting to run for public office as they were so incensed at how President Trump was representing their country.

“My biggest hope is the activation since this national surprise – one of the most heartening things is how many young people are getting into politics and are willing to throw their hat in the ring, particularly young women but not just young women,” she said.

“Partly this is the good effect of Trump’s election – people are saying if Donald Trump can get elected, anyone can. Donald Trump has opened the aperture for becoming a politician and maybe that’s the way the culture will change.”

Ms Power said that the key figures for people to watch is President Trump’s approval rating among Republicans and that has dropped from 91 per cent to 79 per cent and is continuing to drop at a rate of a 1 point per month which was encouraging for all those opposed to his style and type of leadership.

“We will get rid of President Trump at some point, hopefully we will develop more checks and balances on President Trump between now and then and as his approval rating goes down, he becomes a weaker and weaker force in our society.”

She said she was encouraged by the fact that Congress, although it is controlled by Republicans is beginning to stand up to President Trump and she commended a number of Republicans including Lindsay Graham, John McCain, Jeb Bush, Marco Rubio and Geoff Flake for speaking out against him.