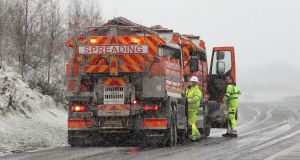 Local authorities are set to begin counting the costs of gritting roads this week as freezing snow and ice hit much of the road network.

Transport Infrastructure Ireland, which process funding for local and regional road maintenance on behalf of the Department of Transport, as well as providing salt to grit all roads, has warned road temperatures could hit lows of minus four degrees across the entire network on Monday night.

The authority said there were 360 salt spreaders and 327 demountable snow ploughs available for use in the Republic during the winter season.

It said “while winter service and salt spreading becomes prominent during a snow event like that experienced over the last few days, it is a routine planned operation that is carried out each year between October and April.” 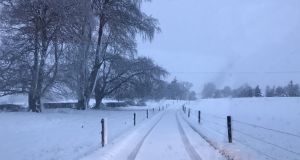 Weekend snowfall In pictures: Your photos of snow from around the country
A Twitter List by DeanRuxton

The good news for motorists is that supplies of salt for gritting the roads have been stockpiled. TII allocates more then €5.3 million to local authorities annually for winter operations and itself purchases approximately €3.5 million of salt stocks each year.

The authority provides local authorities with an annual allocation of salt for use on national roads, and manages the distribution of salt on behalf of the Department of Transport, for use on regional and local roads.

The amount of salt allocated to each local authority is determined based on climatic conditions, usage rates and prevailing conditions. When a prolonged or severe weather event is experienced in a particular county and/or region TII increases the allocation of salt as necessary to cover the increased operations.

As of Friday last, TII had 178,000 tonnes of salt for use in Ireland. Asked about the potential damage to roads from grit, TII said it used salt, and salt did not harm the roads.

Asked if TII would comment on the reduced allocation to local authorities for local and regional road maintenance this year, a TII spokesman said the issue of funding was a matter for the Department of Transport.