Time to rebuild trust between higher education and political system 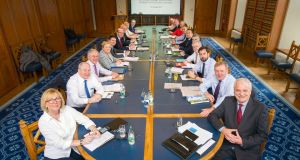 The Government held its Cabinet in University College Cork earlier this year. Despite the smiles, there is a mutual distrust between the political system and higher education, argue Tom Boland and Ellen Hazelkorn. Photo: Daragh Mc Sweeney/Provision

For all the Cabinet meetings held on university campuses, the smiling photo ops of government ministers at launches and sod turnings, the fine phrases of presidents in introducing politicians, you would be forgiven for thinking there is a strong and positive relationship between the universities, institutes and the political system.

You would be wrong.

Underlying the smiles and mutual congratulation lurks a damaging mutual distrust that is in part unique to higher education, but also part of a wider context which sees significant disenchantment with key institutions of the State and civil society.

Prime examples include the Catholic Church, charities, the health service and the Garda. Even the judiciary, long seen as above criticism, are not immune.

Politics itself, and politicians, are the focus of often deep hostility. This disenchantment with public institutions is not confined to Ireland. In many countries there is a thirst to pull down the “establishment” that seems insatiable.

Disenchantment is not created in a vacuum. A key contributor is a breakdown in trust between those with power and the people they serve.

In an Irish context, there is very good reason why the public should have become disenchanted to a greater or lesser extent with each of the sectors and bodies mentioned.

Universities and institutes of technology have recently come into the crosshairs of critics, the harshest of whom have been politicians.

Even if the system still has strong public support, there is enough malpractice, from self-serving behaviour, wasteful or extravagant use of resources to playing fast and loose with accountability requirements, to ignite criticism and keep it glowing strongly.

The result is that, increasingly, government and the system of political oversight seeks to place control on the institutions, clawing back their autonomy and demanding ever more onerous levels of accountability.

The public interest is clear enough. Higher education plays a vital role in the personal development of students, in creating and sustaining an open and democratic society and it is central to social and economic success.

How to reflect that in the internal affairs of a university or institute and in external accountability systems is however more problematic.

The latest, and only, time the issue has been formally and publicly debated was in the enactment of the Universities Act 1997 – the only legislation regulating the universities.

Much of the approach in the Act has been extended to institutes of technology. It is notable in a reading of the Act and the parliamentary record how strongly felt then was the respect for the autonomy of the universities to manage their internal affairs and a clear concern by legislators to ensure that governments did not control the universities.

Such was the outcry from Opposition parties and the media against a perceived take-over of the universities by the State that the original Bill had dozens of amendments.

Crucially, the then government felt it necessary to write into the Act strong protections for institutional autonomy and academic freedom giving to government, through the Higher Education Authority, limited capacity in interfere in the internal affairs of a university.

But times have changed. The sector is not immune to a more general distrust of public agencies and, although it has to-date overwhelmingly used its autonomy to benefit the public interest, individual institutions or individuals within them sometimes act to confirm the worst expectations and prejudices of critics and confound supporters.

Trust, especially with the regulatory and parliamentary oversight bodies, is lacking, leading to a dangerous cycle of misbehaviour and reaction, or over-reaction.

To forge a more constructive relationship will require give and take by all. The leadership of universities and institutes must show zero tolerance for practices that breach public sector requirements.

That such requirements chafe and irritate and may hold back development is irrelevant – work to change them not flout them.

The academic community must address the strong, and widely held, suspicion about their work-loads and other HR practices.

The political system, for its part, needs to be mindful of the risks of reputational damage caused by over-the-top criticism. The sector is too important for grandstanding.

Regulators should react proportionately and take the long-term view of the interests of the sector and the country, whatever the latest provocation from a university or institute.

Is there an appetite on the part of all sides to come together and forge a new understanding, a rebalancing of regulation and autonomy and a rededication to mutual respect? We would all be winners.