Most other major employers, including Aer Lingus, will pay staff for days lost 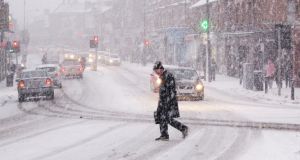 Ryanair said staff would be given the opportunity to make up hours lost to the snow. Photograph: Bryan O’Brien / The Irish Times

Ryanair has confirmed that cabin crew unable to work for two days at the beginning of March due to a massive wave of flight cancellations caused by Storm Emma will not be paid, however it said they will be given the opportunity to make up hours lost to the snow .

A company spokeswoman said that while “all Ryanair employees will be paid as normal”, crews who receive what Ryanair refers to as “productivity payments” – or payments for actual flying time – will not be paid for time when flights were grounded.

However, she said they “will not lose out as they will be able to make up the hours during the year”. She pointed out that crews cannot fly more than 900 hours per year in any event.

A spokeswoman for Aer Lingus said it did not intend to deduct pay from staff “who were unavoidably unable to work during the height of the storm” and she added that the airline would “work through the details and communicate directly with our employees”.

Most of the other major employers, including banks and supermarkets contacted yesterday by The Irish Times, said they would be paying staff for days lost as a result of the snow storms and the Status Red weather alert in place for two days at the beginning of the month.

Tesco, Lidl and Aldi said all employees rostered to work on days the shops were forced to close would be paid as normal. Dunnes Stores declined to comment and Musgraves, the parent company of both Supervalu and Centra, said that as it operated a franchise business, decisions on whether or not to pay staff would be taken at a local level.

On Monday this newspaper revealed that staff at Dawn Meats, one of the largest meat processing plants in the State, were being automatically deducted two days annual leave because the plants were forced to close during the snow.

The decision was condemned by the Labour Party’s Employment Affairs spokesman Ged Nash, who said workers shouldn’t have to bear the costs of closed factories.

The senator criticised the Dawn decision to “to dock workers two days of their holidays for a factory closure beyond their control” and he called for it to be reversed.

“Dawn Meats closed their sites on the Thursday afternoon and Friday in response to the red weather warning leaving workers with no choice. It is not the fault of staff that a status red warning was issued,” he said. “It’s clear that this is an exceptional and unpredictable event and that rank and file staff shouldn’t have to bear the cost of their workplace, office, shop or factory being closed.”

The Restaurant Association of Ireland said companies which did not have adverse weather policies in place allowing them to deduct wages or annual leave from employees would have to pay staff as normal or risk a “breach of contract situation”.

Its chief executive Adrian Cummins said he was unaware of any of his members not paying staff for the snow closure and he called into question the blanket Status Red warning which forced some places to close despite seeing little or no snow.

Neil McDonnell of the Irish Small and Medium Enterprises association said that “on the face of it, employers who announced a shut-down should pay employees for those days”.

However, he pointed out that it was “not that simple for everyone, especially micro-enterprises or small services companies” where payroll can amount to almost 90 per cent of turnover.

“Where there is no business, there is nothing in the bank to pay employees. We have many members who have lost two to four days turnover as a result of Storm Emma, and who will struggle to pay creditors [incl employees] at the end of the month.”