Rules in Kerry on one-off houses will have to change, say councillors 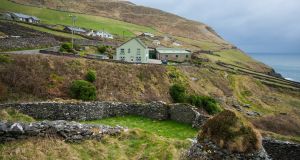 The Dingle Peninsula in Co Kerry. There is a ban on one-off holiday and second homes in the countryside. Photograph: David Soanes/Getty Images

The county with some of the most stringent planning restrictions on one-off housing will have to immediately revise its plans, councillors have said.

The warnings come due to a ruling from the European Court of Justice which found that “locals-only” type clauses are contrary to European law.

Thousands of holiday and second homes were built in the Kerry countryside during the so-called boom, and zoning in Kerry has been engineered to prevent “urban-generated pressure”. There is a ban on outsiders in the rural settlement strategy in pressurised areas under the 2015-2021 county development plan.

There is also a complete ban on one-off holiday and second homes in the countryside. Holiday homes are confined to villages.

Occupancy clauses of at least seven years are a condition of planning for applicants.

Councillors say people from adjacent townlands can fall into the “outsider” category such are the restrictions under the county development and local area plans.

People although originating from the area but who are not working locally have no hope of planning in the countryside under current restrictions.

Killarney Independent councillor Donal Grady, who recently drew management’s attention to the ruling, said the development plans would have to be changed “immediately”.

He said he feared the council may be sued by applicants who were turned down for planning or people who wanted to sell sites to get out of financial difficulty. “The prohibitions are totally illegal,” he said.

The matter came to light following a meeting of Mr Grady’s Independent councillor grouping, and he and other councillors have taken legal advice and have been told the European ruling is applicable in Kerry and other counties.

He and his daughter Maura Healy-Rae, who replaced him on the council of Killarney Municipal District , are currently dealing with six cases in the Killarney area – in Muckross, Aghadoe, Tiernaboul and Kilcummin – in which local applicants have been refused planning for one-off houses.

Mr Healy-Rae said in Muckross the son of a local family could not get planning permission 400 yards from his parents’ home. “The policy is discriminatory. The policy is wrong. Before ever this ruling came to light from Europe, I have said it was wrong.”

There has been no official comment from the council management on the matter, but it is understood a response to deal with the possible repercussions is being formulated.