French Presidential Election Day: guide to who, why, when and how

Emmanuel Macron of the centrist En Marche! movement and Marine Le Pen of the far-right National Front party face each other in a run-off for the French presidency. The new president will be announced at 8pm French time (7pm Irish time) on May 7th. 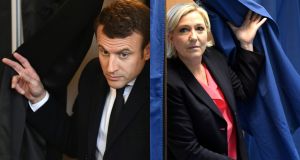 By tonight, we will know the name of the Fifth Republic’s eighth president.

The candidates: On one side is Emmanuel Macron, a 39-year-old, pro-business, socially progressive, pro-EU liberal. On the other is Marine Le Pen, a 48-year-old, anti-EU, far-right nationalist.

Why these two? The first round of voting was on April 23rd, when 11 candidates stood for election. The outgoing first-term president, François Hollande, did not stand, and other big names, such as Alain Juppe and Nicolas Sarkozy, fell by the wayside. French voters rejected the big political parties who have governed France since the 1950s. Today, it’s a straight run-off between two candidates – i.e. whoever gets the most votes will be the leader of France for the next five years.

Voters: There are 47 million eligible to vote, with 70,000 polling stations open throughout France since 7am (Irish-time). They can stay open for a maximum of 12 hours. There are official voting stations in Dublin and Cork for Irish-based expats.

Macron’s party: Macron’s En Marche! (On the Move!) movement was only established a year ago, and this is its first election. In fact, Macron has never before stood for election, though he was appointed as Minister of Economy and Finance in 2014 during President François Hollande’s government.

Le Pen’s party: The National Front runs eight French towns and has 20 MEPs in the European Parliament. Le Pen has been an MEP since 2004, and took over the leadership of the party – from her father – in 2011. She has run for president of France before, in 2012, when she was third (with 18% of the first round vote), behind François Hollande and Nicolas Sarkozy. Long associated with racism, Le Pen has tried to soften the party’s image by relaxing some political positions and expelling some members accused of views even too extreme for the far-right party – including her own father.

Policies: The backdrop to the campaign has been a weak economy, unemployment at 10% – including one in four of under-25s – as well as the recent and ongoing shocks of Brexit and Donald Trump. Macron favours EU reform, though also even deeper European integration. If Le Pen wins, she is likely to hold a UK-style Brexit referendum. Among Le Pen’s long list of reforms includes cutting the pension age to 60. Macron wants to cut 120,000 public-sector jobs, reduce public spending by €60 billion.

However, the number one issue of the campaign has been the threat of terrorism – the first round took place three days after a policeman was shot dead on the Champs Elysées in Paris. Le Pen has attacked Macron throughout the campaign, claiming he is too soft on suspected terrorists. She wants to suspend the EU’s open-border agreement.

So, it matters who wins? Today, French voters will not only choose a future direction for France, but also for the European Union. Therefore, this election will undoubtedly directly affect Ireland.

And next: Whoever wins, governing will be far easier with a pro-president parliament. The 577 seats in the National Assembly are up for grabs in legislative elections, also held over two rounds, on June 11th and 18th. Both candidates could certainly be considered outsiders - currently, Macron’s party has no MPs, Le Pen’s has only two.

Who will win? All polls suggest Macron is heading for a victory. And, well, you know how opinion polls are always right, right? To be fair, French pollsters were remarkably accurate in their predictions for the first round of voting. Since then, polls consistently have Macron winning, by around 60% to 40%. A low-turnout is probably Le Pen’s best hope.

A final twist: Hours before all campaigning halted on Friday night, Macron’s team announced it had been the target of a “massive and coordinated” hack that dumped tens of thousands of real and (according to the campaign) fake campaign documents on to the internet. Will the final unexpected twist in a bizarre and unpredented campaign influence the result?

7am – Polls opened in France.

11am – Interior Ministry released first details of turnout, saying turnout was slightly lower than in the last run-off in 2012. The ministry said 28% of eligible voters had cast ballots by midday.

4pm – An update on turnout shows 65% have now voted. The level is lower than at the same stage of polling day in the past three presidential elections.

6pm – Polls close in many parts of the country, particularly rural areas.

7pm – Rest of polling stations close. Preliminary results will be published almost immediately. Both the Interior Ministry and polling firms will publish numbers as soon as voting ends. If the first projections show a close race, all eyes will then turn to the official results, which will roll in throughout the evening.