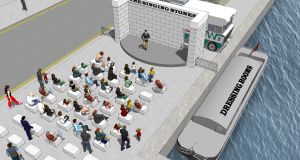 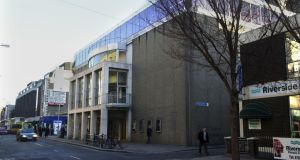 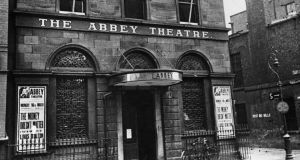 Dublin’s Abbey Theatre pictured before it was destroyed by fire in 1951. Photograph: Getty Images

The charred remains of Ireland’s original Abbey national theatre, which was gutted in a fire nearly 70 years ago, could soon rise from the ashes and find new life down by the Liffey’s docks.

The fire in July 1951 destroyed the building, though mystery has surrounded the fate of much of the stones that were removed when the ruins were demolished in 1961.

Now, developer Harry Crosbie has reached an agreement with the family who have been the stones’ guardians, and has drawn up plans to use some of them to build an open-air stage.

The granite blocks of the facade and the side walls were saved by Daithí Hanly, Dublin’s city architect at the time after he came across the rubble and was told by builders that it was destined for the scrap heap.

Mr Hanly, who had designed the Garden of Remembrance and the Basilica at Knock, immediately understood the stones’ significance, given the connections with Yeats, Gregory, Synge and Sean O’Casey.

He asked for all of the blocks from the Abbey - the world’s first subsidised theatre - to be individually numbered and brought to his Dalkey home, rather than being dumped, as had been planned

The Abbey was subsequently rebuilt using contemporary materials - as was common in the 1960s - so the static stones were left to gather moss in Mr Hanly’s Vico Rd garden with its views over Dublin Bay.

“Yeats is a poet of world-standing and these stones have resonance with the foundation of the State so it is fitting that they will come alive again for the public in Dublin for the next 100 years,” he said.

The open-air venue would only be used for free events and would not require State funding, though a bid is being made to get a corporate sponsor to put up €250,000.

The Singing Stones’ plan has yet to get a green light from Dublin City Council, while a licence from Dublin Waterways will also be needed to use a small patch of land of the banks of the Liffey at Grand Canal Dock.

Highlighting the community nature of the project, Crosbie is asking schools, colleges, bands, dance troupes, poets, comedians and others to come forward with ideas that could be staged there.