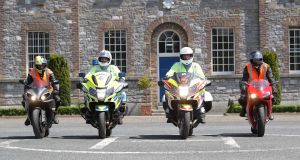 Since 2010 some 171 motorcyclists have been killed and 629 seriously injured. Photograph: Robbie Reynolds

Motorcyclists are not allowed to use bus lanes and should “think of their families” before taking risks like weaving in and out of traffic, driving in t-shirts and drink driving, the Road Safety Authority has warned.

She asked that they remember they are among the most vulnerable of road users, remarking that just “a clip” between two cars which might result in a broken wing mirror, could result in very serious injury for a motorcyclist.

Road Safety Authority chairwoman Liz O’Donnell asked motorcyclists to be aware of the safety message and “to think of their families” before taking to the road this weekend.

Since 2010 some 171 motorcyclists have been killed and 629 seriously injured and an examination of forensic investigation files completed in 2016 found almost a third of motorcyclists involved in fatal collisions between 2008 and 2012 had consumed alcohol.

The investigation also found speeding was a factor is almost half of all motorcyclist deaths.

While the authority said the majority of motorcycle riders were “absolutely aware of their vulnerability when biking”, some motorcyclists may “not be so safety conscious”.

Younger riders in particular and those on more powerful machines “need to appreciate the risk they face and take all necessary precautions to ensure their safety”.

The RSA study also found that half of the 80 motorcyclists deemed culpable for the collision were aged between 25 and 34 years old.

Ms O’Donnell said the “message to these bikers” is to never drink drive.

“You simply cannot control a motorbike if you are impaired from drinking alcohol”.

She added “there is a group who are riding motorbikes with no regard for their personal safety or the safety of others ... If you are not going to change your reckless behaviour then I would appeal for you to do it for the sake of your family and loved ones.”

Assistant Garda commissioner David Sheahan said: “This is not only a safety message for motorcyclists. Drivers need to look and look again for that motorcycle, especially when overtaking or turning right”.