Government may cover cost of care for women seeking terminations 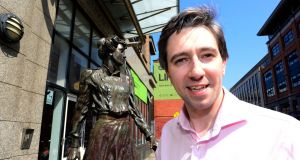 Minister for Health Simon Harris is assessing if services provided under the Maternity and Infant Scheme can be expanded to women who may require an abortion. Photograph: Cyril Byrne

The Government is considering covering the cost of care for women seeking a termination of their pregnancy.

Minister for Health Simon Harris is assessing if services provided under the Maternity and Infant Scheme can be expanded to women who may require an abortion.

Currently, that programme allows for maternity services free of charge when provided by a family doctor (GP) and a hospital obstetrician.

Government sources insisted the assessment was at the preliminary stage but it was keen there would be “no barrier to accessing services on the basis of affordability”.

Any such service will be subject to discussions with the GP representatives, it is understood.

The Minister is also examining if the State can alleviate the financial burden for parents who choose to travel to Britain after receiving a diagnosis of a fatal foetal abnormality.

The Government has confirmed legislation to regulate the termination of pregnancy will be considered by the Cabinet on July 10th and considered in the Dáil on July 11th and 12th.

In the meantime, Mr Harris has asked Attorney General Séamus Woulfe to examine if the Information Act 1995 can be lifted to allow doctors in Ireland refer women to abortion clinics abroad and to consult with doctors in other jurisdictions about their medical status.

The Minister is also understood to have requested Mr Woulfe to examine if exclusion zones can be enforced to ensure women are not intimidated by protestors when accessing services.

Sinn Féin spokeswoman on health Louise O’Reilly has asked that it be made a criminal offence to harass doctors who agree to provide abortion services and to intimidate women seeking the services.

Fianna Fáil TD Stephen Donnelly also requested that the threat of decriminalisation be lifted for women who procure an abortion here. However, it is understood this is unlikely until the final Bill is considered by Cabinet.

Meanwhile, Mr Donnelly told The Irish Times he will not accept any amendments from his party which are “outside the parameters” of the Bill published by the Government when the referendum is passed.

Fianna Fáil leader Micheál Martin has said any TD or Senator must go through Mr Donnelly when considering amendments to the legislation.

Limerick TD Niall Collins supported calls by Barry Cowen to impose a whip on the parliamentary party to ensure everyone votes in favour of the law.

Fianna Fáil TDs including Anne Rabbitte and Robert Troy said they had no objection to Mr Martin enforcing the whip. However, Ms Rabbitte said most members were clear on how they should proceed.

Mayo TD Lisa Chambers said she did not foresee the freedom of conscience being abandoned at this juncture, while Dublin Bay South Jim O’Callaghan said all TDs have a duty to give effect to the decision of the people.

Sligo-Leitrim TD Marc MacSharry said he was a No voter but would unequivocally support the legislation.

“I have no difficulty, while a No voter, in separating my personal view and my legislative obligations and responsibilities and would therefore be supporting legislation when it comes and happy to feed any thoughts or ideas or suggested amendments into our health spokesman as is the practice with all legislation.”

Louth TD Declan Breathnach said he had difficulties with the 12-week proposition but stressed the people had spoken and he would accept that.

Taoiseach Leo Varadkar has told the Fine Gael parliamentary party there is a free vote for members on the upcoming legislation and any proposed amendments.

He said it was up to party colleagues to decide how they wanted to approach it and he would not seek to impose any view on members.