Students not equipped to identify sources of information or think critically, survey says 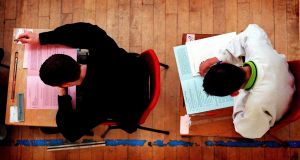 Examining the examinations. A new study has surveyed students who had completed the State exams last summer and had recently finished their first year in college. Photograph: Bryan O’Brien

A university study has found Leaving Cert students feel poorly qualified to identify sources of information in the era of fake news.

The survey of 304 first year students in Dublin City University (DCU) found nearly two-thirds did not feel the Leaving Cert taught them how to think independently or identify sources of information.

The study, carried out by the institute of education at DCU, surveyed students who had completed the State exams last summer and had recently finished their first year in college.

Overall it found just 28 per cent of students felt the Leaving Cert prepared them to identify sources of information, and 27 per cent said the exams equipped them to weight up and compare information from different sources.

When it came to knowing how to use technology to assist their learning, only 24 per cent of students said the Leaving Cert prepared them well in this area.

Prof Michael O’Leary, one of the researchers behind the work, said the independent-thinking skills gap between secondary school and third level was contributing to high dropout rates in the first year of some university courses.

“It is in the first semester that we find students can really struggle to get up to pace,” he said. Difficulties adjusting to university education were also reported by “high achieving students” who had secured a high number of CAO points, Prof O’Leary said.

The overall findings of the study portrayed a “worrying disconnect” between how students were learning in secondary school and what was required when they started university, he said.

The study did reveal students felt the Leaving Cert exams prepared them for certain difficulties they faced in third-level education. Some 83 per cent said the exams trained them to persist when learning was difficult, and 72 per said it helped them learn to manage their time. Three-quarters of respondents said the exams prepared them to cope with the pressure of a heavy workload.

Prof O’Leary said the format of the Leaving Cert was predisposed to a certain kind of learning, geared towards memorising large amounts of information. But college assignments were “much more open-ended”, which many students had problems adjusting to, he said.

Certain subjects at secondary level, such as history, did help develop research skills and teach students how to structure an argument, he said.