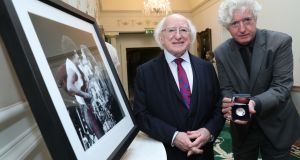 Mr Higgins was presented with a €15 commemorative coin featuring an image of the late guitarist who died in 1995, aged just 47.

Struck in sterling silver, the coin depicts Gallagher playing the guitar against a backdrop of a vinyl record over an image of a map of the world.

The first coin in the series was presented to Mr Higgins at Áras an Uachtaráin by the governor of the Central Bank Philip Lane in the presence of Rory Gallagher’s brother Dónal Gallagher.

Mr Higgins said societies from the beginning have sought to acknowledge what is important to them in their coinage. He referenced the appointment of the poet WB Yeats in 1927 as the chair of the Currency Commission which decided on designs for Irish coinage in the new State. They chose animals as the best symbol for the nation.

Mr Higgins added: “In our time, I would ask, what better symbol could we find for our creative, artistic, freedom-loving country than an image of one of our most iconic musicians, Rory Gallagher?

“Rory was not only popular for his ability – though he was one of the greatest musicians of his age. As all who knew him will tell you, he was warm, generous, kind and compassionate – indeed so much so that he belied all the stereotypes of the ‘rock star’. At concerts, he was never distant but was always glad to be among those attending, before and after.”

The coin is one of three representing Irish musicians which will be issued.

The ‘Modern Irish Musicians’ series will include silver coins commemorating Phil Lynott in 2019 and Luke Kelly in 2020.

Speaking at the launch, Mr Lane said the success of the Ballyshannon International Rory Gallagher festival showed how cultural value can translate into economic value.

He also spoke of Gallagher’s enduring appeal, noting that 14 of the top 20 vinyl records in the British jazz and blues category were the guitarist’s, following their re-release last year.

“It is European and global – the ongoing impact of Rory Gallagher. Around the world it has such a big impact, which is wonderful,” he said.