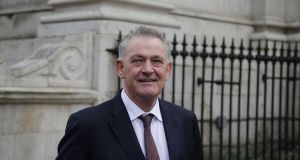 Clare County Council has become the second local authority to nominate Dragons’ Den star and businessman Peter Casey as a candidate in the forthcoming presidential election.

Kerry County Council earlier on Monday voted to nominate him, with four nominations needed for a place on the ballot paper on October 26th. He was proposed in Co Kerry by Fianna Fáil.

After the meeting in Kerry, Mr Casey said he was confident of getting other councils to support him to allow him go forward. He also said he was not running to lose and was prepared to spend up to the cap of €750,000.

“I didn’t stand to lose. I believe I have a very good platform ,” Mr Casey said.

In Kilkenny County Council, a motion to nominate Ms O’Doherty was defeated on Monday.

She was proposed by Cllr Breda Gardner (Independent) and her motion was seconded by Cllr David Kennedy (Sinn Féin). Cllr Seán Tyrrell (Sinn Féin), Cllr Melissa O Neill (Ind) and Cllr Tomás Breathnach (Labour) all supported the motion. Eleven members abstained from the vote while seven members voted against the motion. Cllr Gardner told members that she believed that Ms O Doherty “deserves to be on the ballot paper”.

Other councils have already nominated three candidates to stand in the election: businessmen Seán Gallagher and Gavin Duffy and Senator Joan Freeman.

Sinn Féin MEP Liadh Ní Riada will also be nominated following her selection at a party meeting on Sunday.

This means at least four candidates will compete against the incumbent, President Michael D Higgins, who holds a commanding lead in the polls.

Candidates can be nominated by 20 Oireachtas members or four county councils. There are still 19 councils who have yet to nominate anyone.

Earlier artist Kevin Sharkey, who dropped out of the presidential race last night, denied his campaign was a promotional tool for his painting career.

Announcing his withdrawal, Mr Sharkey called the process of trying to secure support from four county councils a “circus” and a “farce”. His statement also provided details of an exhibition showcasing his paintings entitled, The Presidential Collection 2018, as well as a music single he intends to release.

“The reason I’ve added [details of the exhibition] to the statement was because that’s what I’ve done since I was aged 12½. I’ve been in the media a long time and I know that when you are making an announcement it is a good idea to let people know what you intend to do next,” he said on Monday morning when asked if the campaign was a publicity stunt. Mr Sharkey added that he is the most successful Irish artist in terms of sales.

“I make no apologies for being a businessman,” he told The Irish Times.

He said at no stage during his campaign did he “mention or even allude” to his career as an artist.

Earlier this month in a presentation to Kilkenny County Council Mr Sharkey, who is black, said he has sold 10,000 paintings and if he had “red hair and freckles” he would have had a statue erected in his honour.

Asked why he is withdrawing, Mr Sharkey replied the process was a “pantomime” and “a waste of time”.

“It’s bad enough to waste taxpayers’ money with this nonsense, but to waste my time as well!” he said.

He cited the example of some candidates who have been nominated by councils despite not making presentations to them. Mr Sharkey said the process was so flawed you might as well “rip up the Constitution”. He said the consequence is a narrow field of candidates, including three wealthy businessmen and a Senator.

Mr Sharkey’s platform included a call to bring back the death penalty for attacks against elderly people in their homes. He also criticised how motorways have cut off small rural towns and suggested opening Famine villages to draw tourists.

All villages should have a girl with red hair playing a harp in the corner, someone cooking cabbage or someone burying someone outside like they used to do in the old days, he said. “This is a gold nugget that we are sitting on.”

He is the first potential candidate to withdraw from the race. He has asked councillors who supported him to transfer their allegiance to journalist GeMs O’Doherty who is running on an anti-corruption platform.

“She is a woman of huge integrity and is currently bravely shining a light on the rampant corruption that is destroying our beautiful country and democracy. And she needs to be heard and listened to,” said Mr Sharkey.

Four county councils met on Monday to decide on whether to nominate further candidates for the presidency.

The majority of councillors on Louth County Council on Monday voted not to nominate someone for the election.

However, given the vote was not unanimous, next Monday was earmarked for the required special meeting of the council in case any of the councillors wished to nominate someone before the deadline of September 26th.

A number of councillors congratulated Mr Duffy, from Drogheda, on securing a nomination.

Alan Sherry, senior executive officer with the council advised members they still had time if they wished to nominate somebody and reminded them that three clear days’ written notice was needed for the required special meeting and next Monday was suggested for it.

Initially Cllr Thomas Byrne, said he wanted to nominate Mr Casey although he later withdrew that.

When Cllr John McGahon proposed the motion that the council not nominate anybody, there were a number of seconders.

Sinn Féin members abstained on the vote while three councillors voted against it.

Most of the main Oireachtas parties have said they will support Mr Higgins’s candidacy. However, there are enough Independent TDs and Senators to nominate one other candidate if they can agree one.

Councillors in Kilkenny and Westmeath are also expected to vote today on whether to nominate one of the remaining hopefuls.

Mr Gallagher and Mr Duffy have asked the remaining councils to back other candidates as both have already secured nominations.

Last Thursday, Dublin City Council refused to nominate any candidate. A meeting to hear from potential candidates ended in farce following a presentation by satirical candidate “Bunty Twuntingdon-McFuff” who called for, among other things, burning the dead as a source of fuel.

“I’m protesting against the quality of candidate,” she said afterwards.

According to a poll published in the Sunday Business Post yesterday 67 per cent of people would re-elect Mr Higgins. His closest opponents are Mr Gallagher at 15 per cent, Mr Duffy at 6 per cent and Ms Freeman at 3 per cent.

Those who said they would vote for a Sinn Féin candidate amounted to 7 percent.