Peter Casey willing to spend up to €750,000 on presidential campaign 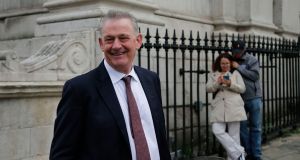 Kerry County Council have voted to nominate Peter Casey, the businessman and RTÉ Dragons’ Den star as a candidate for the presidential election.

After the meeting Mr Casey said he was confident of getting the necessary three other councils to support him. He also said he was not running to lose and was prepared to spend up to the cap of €750,000.

A total of 14 people had contacted the council to request a nomination for the presidency, mayor of Kerry Norma Foley outlined at the start of the proceedings.

Mr Cahill said Mr Casey had already invested in business in Co Kerry and his programme on attracting the children of Irish emigrants to spend time in the Gaeltacht would be of benefit. He had major business contacts in the US and Australia and could be “a great ambassador”.

Nine of the 10 Fianna Fáil councillors on the 33-member council, voted for Mr Casey.

The move by Sinn Féin to propose Ms O’Doherty caused surprise in some quarters.

Proposing Ms O’Doherty, Sinn Féin’s Cllr Pa Daly said he wanted to make it clear he would be voting for and canvassing for the party candidate Liadh Ní­ Riada.

He believed in giving a voice to candidates.

Four people had addressed the council, two weeks ago, including Ms O’Doherty, a woman “who came without a PR company,” Cllr Daly said.

She was a fearless and brave in highlighting injustice in her 20 years as a journalist, Cllr Daly said.

“There has been quite a frightening whispering campaign against her,” Cllr Daly said.

Peter Casey was someone he could not support given his backing of Nato, Israel and his criticism of Michael D Higgins’s visit to Cuba, “while saying he would give a very warm welcome to Donald Trump, ” Cllr Daly said.

Speaking to reporters after the meeting, Mr Casey said he was “absolutely delighted”. After Donegal, Kerry was very dear to him and its young people were leaving and not coming back.

“I didn’t stand to lose. I believe I have a very good platform,” Mr Casey said.

He believed in small businesses and said rural Ireland was not getting the infrastructure it needed to support young people returning home to work.

He also wanted a five-year term and a change in screening for candidates – with each presidential candidate needing consent of 50 councillors before being allowed address a meeting.

Asked why so many “Dragons” were running, Mr Casey said: “It’s absolutely bizarre.”

Gavin Duffy had been “a big surprise,” Mr Casey said.