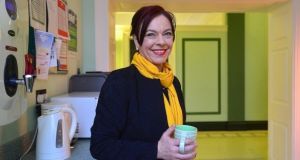 Climate “breakdown” rather than Brexit is the defining issue of our time, the leader of the Green party in Northern Ireland Clare Bailey has told her party’s annual conference.

In her first annual conference address as party leader, the South Belfast Assembly member, said Brexit and the absence of Stormont was having a deleterious impact on the lives of everyone across Northern Ireland, particularly those with little economic power and influence.

“Many say they want a so-called new Ireland while others are concerned to maintain the United Kingdom at any cost. There is a new reality dawning for all of us - it’s called climate breakdown,” Ms Bailey told the conference in the Mac centre in Belfast.

“I want those who promote the notion of a new Ireland to set out their position on mitigating climate change in this new dispensation, as well as protecting rights, providing health care and other public services and creating a fairer and more just society,” she added.

“I’d also ask the same questions of those who avow the protection of the union, particularly in a post-Brexit Britain,” she added.

Ms Bailey described her pride at being elected to the Assembly but frustration at the continuing Stormont deadlock. “It is not crunching electoral data and amassing the greatest number of seats that matter. I measure political success by the ability to effect meaningful change for society and I became involved in politics to make that change,” she said.

“Adherence to the first past the post system in Westminster has fostered an ultra adversarial politics which pits two parties against each other. This system created the conditions that led to a EU referendum marked by misinformation and division,” she told delegates.

“Similarly, in Northern Ireland (which operates on a proportional representation system) the previous Executive descended into a two party system which was characterised by mistrust, suspicion and ill will.”

Ms Bailey referenced her own background as a “child from the Lower Falls, who believed when growing up that politics was about men in suits arguing against each other.”

She described her progress through Queen’s University Belfast as a lone parent of two children and a period of homelessness coupled with a spell in a hostel during her studies as a serious setback for herself as her young family.

“There is a growing housing crisis in Northern Ireland, fuelled by a lack of new build social housing and so called welfare reform. I’ve lived through that experience and it’s a painful one,” she said.

Ms Bailey told the conference that the Greens hoped to make gains in the local council elections in Northern Ireland in May in order to “create positive change and progress”.