Holland 1, a remotely operated vehicle belonging to the Marine Institute, is loaded on to the Granuaile in Galway and taken to Blacksod Bay, Co Mayo to be used in the ongoing search for the missing crew members of Rescue 116. Video: Joe O'Shaughnessy 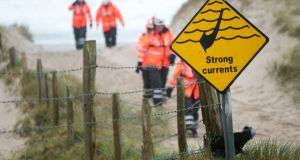 High winds and a heavy Atlantic swell is hampering the continued search for the three airmen missing from Rescue 116, the Irish Coast Guard Dublin-based helicopter which crashed off the north Mayo coast early this week.

However, wind conditions are forecast to be moderate on Sunday which may provide a window early next week for pinpointing and retrieving the aircraft’s “black box” recorder.

Hydrophone equipment deployed with the help of Marine Institute surveyors picked up a faint signal or “chirp” from the black box earlier this week in about 40m of water, close to the last known position of the helicopter at Blackrock lighthouse.

Senior pilot Capt Dara Fitzpatrick, a mother of a three-year-old son, died in the crash, and her funeral takes place in Dublin on Saturday. President Michael D Higgins is due to attend.

A minute’s silence will be held before the start of the Ireland-England rugby match for Capt Fitzpatrick and her missing colleagues, co-pilot Capt Mark Duffy, winch operator Paul Ormsby and winchman Ciaran Smith.

The US Federal Aviation Administration (FAA) has said it is monitoring the official investigation into the crash, and will “evaluate information as it is received to determine the need for any additional action”.

The US FAA reissued an airworthiness directive or warning notice about the Sikorsky S-92 earlier this month, advising repeat inspections of certain bearings. This was prompted by reports of failed bearings, with “subsequent loss of tail rotor control”.

The first alert in January followed an incident involving the same make and model on a North Sea platform. It was landing on the West Franklin rig on December 28th, 2016, when it left significant gouge marks on the deck. The US FAA said that the “unsafe condition” could exist, regardless of number of hours of time in service.

CHC, the Canadian helicopter company providing Sikorsky S-92s on contract to the Irish Coast Guard, said on Friday it had been “complying with the directive since it was originally issued by the FAA” and “no defects have been found”.

“I have a crew of 55 here who are bursting to be involved, but the nature of this situation is that we have to hold off till it is safe, and be ready and be fresh when the opportunity comes,” he said, speaking from the ship which is on-scene co-ordinator for the continued sea search.

The Irish Lights vessel Granuaile, which has a dynamic positioning system allowing it to work in large swells, is taking on equipment in Galway for the Naval Service diving team and will return to Blacksod Bay.

Cdr Fitzgerald said the “ping” from the black box recorder was picked up between a big and small rock below the Blackrock plateau, marked by sheer cliffs and a turbulent swell. Blackrock lighthouse is 13km west of the north Mayo coast.

“Once we can make the approach with the Granuaile, the first part is to deploy sidescan sonar equipment to get a better picture of the seabed area,” he said.

The largest of three remotely operated underwater vehicles (ROV) or tethered underwater robots, named “Cherokee”, may then be deployed, and it is equipped with a “grab arm” which can retrieve objects from the seabed.

“The Naval Service diving section has been working with the Granuaile before, and that’s another big advantage,” Cdr Fitzgerald said.

“If the ROV is not suitable for retrieval, we will then move towards a physical dive, but safety is paramount,” he said. The search teams are hoping the black box is still with the fuselage and that the missing men are in that location.

Items from the helicopter have been retrieved from the shore as far north as Annagh Head.

Belmullet Garda Supt Tony Healy has urged members of the public who find any items relating to the search to notify the Garda of the location immediately.

Relatives of the missing men are being briefed by Garda and Irish Coast Guard liaison and offered support, including food and accommodation, by the local community.

The Air Accident Investigation Unit found “significant”pieces of the helicopter close to the lighthouse on Blackrock on a high plateau on Thursday evening, but has said there is no sign of any “impact marks” on the lighthouse .

The crew of Rescue 116 had turned to approach Blacksod on the mainland for a routine refuelling when they lost communication. No mayday was issued and no emergency locator beacons were picked up.

St Patrick’s Day parades in Belmullet, Bangor Erris and Eachléím, close to Blacksod, were cancelled as a mark of respect, and Civil Defence and Fire Service teams withdrew from other county parades to be available for shore searches. The Irish Coast Guard says it has been overwhelmed by messages of sympathy and offers of support from members of the public.

Bishop of Limerick Brendan Leahy remembered the “heroism and mission” of Capt Fitzpatrick and her colleagues in his St Patrick’s Day Mass for the Defence Forces. Linking the selfless kindness of St Patrick to that of Dara Fitzpatrick, her colleagues, the defence forces and many others, Bishop Leahy said the heroic pilot was an inspiring example for all of us.

“I was struck by her comments in the Rescue 117 documentary she featured in, which was played back on Wednesday’s news on RTÉ. She said ‘there’s no way in the world we would do anything else in life’. Dara had a strong sense of ‘giving’ to others. A pilgrim on life’s journey, like all of us, she seemed to be a person who got up each day thinking of helping others,” he said.

Meanwhile, gardaí have advised motorists that through traffic from Johnny Fox’s pub to the Enniskerry road at Kilternan, Dublin, will be diverted at Fox’s from 10am to 1pm on Saturday to facilitate Capt Fitzgerald’s funeral in Glencullen.