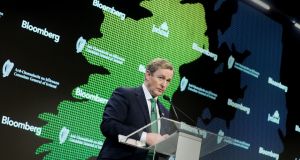 Taoiseach Enda Kenny at Bloomberg headquarters: “I’ve a number of immediate priorities on my desk when I arrive back tomorrow morning at 10 o’clock and I intend to start working on those.” Photograph: Niall Carson/PA

Taoiseach Enda Kenny has said the restoration of the Northern Executive and the agreement of an EU position for the Brexit negotiations “take precedence” over giving a timetable for his departure as Fine Gael leader and Taoiseach.

Asked if he would be briefing Fine Gael TDs next week on his plans to step aside – as many expected – Mr Kenny said on Friday he had other priorities on his agenda.

“What I did say is that I would deal with it effectively and conclusively and that’s my intention,” Mr Kenny told reporters at the St Patrick’s Day Parade in New York when asked about his future as party leader and Taoiseach.

However, referring to the Stormont talks and Brexit, he added: “I think these are priorities that take precedence over anything else there.”

Asked when he was going to deal with the question of his future, Mr Kenny said: “I’m not going to answer that for you. I’ll deal with my own parliamentary party. I spoke to them before I came to New York, I’m telling you now that I’ve a number of immediate priorities on my desk when I arrive back tomorrow morning at 10 o’clock and I intend to start working on those.”

Following criticism of his leadership in Fine Gael in recent weeks and threats of a challenge to him unless he specified a timetable for his departure, Mr Kenny told TDs that he would deal “effectively and conclusively” with the issue of his leadership when he returned from the US.

This was taken by most Fine Gael TDs to mean Mr Kenny would signal a timetable for his departure on his return, and calmed tensions in the party over his leadership. Most TDs expect an April date for his departure as party leader, enabling a new Fine Gael leader to become taoiseach probably in early May.

Friday’s comments, however, throw that timetable into doubt and will surprise Fine Gael TDs – not least supporters of the two likely contenders to succeed him, Simon Coveney and Leo Varadkar.

Fine Gael Ministers contacted last night did not comment on Mr Kenny’s remarks but Dublin TD Alan Farrell, who has previously called on Mr Kenny to step down, said it was up to Mr Kenny to lay out his own timetable. However, he said he expects it to happen “fairly quickly”.

“We’ll have to let him say what he’s going to say. But he has a responsibility to the parliamentary party to speak on the matter,” Mr Farrell said.

The Dáil returns next week and Mr Kenny will have a scheduled meeting of the Fine Gael parliamentary party on Wednesday.

Mr Kenny’s comments come amid little sign of a breakthrough in the Stormont talks that would enable an executive to be formed before next week’s deadline. If no executive is formed, secretary of state for Northern Ireland James Brokenshire may call fresh elections.

“My first priority is to put in place the executive in Northern Ireland, ” Mr Kenny said. “We have no government or devolved authority in Northern Ireland. I hope that the parties that are elected will accept the responsibility of putting together an executive within the three-week period,” he said, adding it was “fundamentally important” in terms of the Brexit negotiations about to commence.

Meanwhile, Mr Kenny’s forthright comments to US president Donald Trump on immigration drew widespread praise from critics of the president in the United States. However, Mr Kenny defended his decision to invite Mr Trump to Ireland, saying he was “very happy” to extend the invitation.

“In respect of the invitation to the president, it is normal courtesy in our country that if you receive an invitation from somebody you return that invitation at another time. I said to the president I would be very happy to invite him during the course of his presidency.”