Restrictions around the world: How countries are tackling the latest surge

Measures vary from country to country 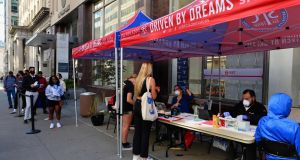 Students stand in line to get tested for Covid-19. Photograph: by Angela Weiss/AFP via Getty Images

Israel 3,275 cases per 100,000 (14 day average to October 7th).
Israel’s experience with Covid-19 has put our own recent spike into perspective. With roughly twice the population of the Republic (9 million v 5 million), it has had 281,000 cases to date as opposed to 40,000 in the Republic. Daily cases peaked at 9,015 last week and are still running at more than 4,000 a day. On September 13th, the Israeli government approved a total three week countrywide lockdown which has been extended to October 14th. Israeli prime minister Benjamin Netanyahu has suggested restrictions could last for another six months.

People are limited to within a kilometre of their home except for essential activities like buying food and chemists. All schools, except special schools are closed. All malls, hotels, bars, restaurants and gyms are also closed. Even religous gatherings in this intensely religious country with Ultra-Orthodox Jews in government, are strictly limited. Countries like Israel are being watched closely to see how the fare with such a severe lockdown.

Spain 305 cases per 100,000 (14 day average to October 7th)
Spain has consistently had one of the highest rates of Covid-19 in Europe. In Madrid 40 per cent of all ICU beds are occupied by people with Covid-19.

In the Madrid area and surrounding cities, people are only allowed to leave their towns to go to work or the doctors. Bars and restaurants must close at 11pm, there can be no standing at bars and capacities are limited to 50 per cent inside and 60 on wide walk terraces.

Outside the Madrid area, most places are operating normally.

Paris is the first city in France to be part of the maximum alert zone. All bars must close, but restaurants may remain open. There is a ban on gatherings of more than 10 people in public places.

All parties and gatherings including student and family events and wedding receptions in public spaces are banned, dance halls and community halls are closed and outdoor sports pitches and stadiums can remain open but must limit attendance to 1,000 people or 50 per cent of their capacity (whichever is larger). Other cities in France may soon be put on the same alert.

Czechia 346.1 cases per 100,000 (14 day average to October 7th)
Formally known as the Czech Republic, the country has experienced a huge increase in Covid-19 numbers and declared a national state of emergency on October 5th. Secondary schools in worst affected areas have closed, but kindergartens and primary schools remain open. Indoor events with more than 10 people are banned as are and events with more than 20 people outdoors. Restaurants remain open, but only a maximum of six people can share a table.

Netherlands 270.2 cases per 100,000 (14 day average to October 7th)
The Netherlands has taken a more hands-off approach to the pandemic and the prime minister Mark Rutte has continued to insist that people do not need to wear masks. However, in response to escalating cases, restrictions were introduced at the end of September. The number of people meeting indoors is limited to 30 people. You can host no more than three guests in your home. Restaurants and bars serving food and drink can accept no new customers after 9pm and must be closed by 10pm. Indoor spaces such as historic buildings, libraries and museums must operate using reservations on the basis of time slots. This does not apply to retail stores and markets.

Belgium 232.8 cases per 100,000 (14 day average to October 7th)
Belgium has tightened restrictions on home visits. Visitors to bars can only sit not stand and there is a curfew of 11pm. Bars and cafes in Brussels will be forced to close for a month from Thursday after the Belgian capital overtook Paris in terms of Covid-19 infections per inhabitant.

United Kingdom 189.9 per 100,000 (14 day average to October 7th)
There are four nations in the United Kingdom each with devolved powers to deal with Covid-19. UK prime minister Boris Johnson has already introduced the much derided UK-wide 10pm closing time in pubs and restaurants and the “rule of six” where nobody can have more than six visitors to a house.

People will not be able to meet indoors in pubs in cities including Liverpool, Warrington, Hartlepool and Middlesborough from Saturday. The Westminster government is expected to introduce a “traffic light” system for local lockdowns from next Monday in England. The north-west of England, including the cities of Liverpool and Manchester, is facing renewed restrictions following a surge in cases.

Scottish First Minister Nicola Sturgeon has announced draconian restrictions. All pubs in Glasgow and Edinburgh will close and there will be a 16 day nationwide ban on indoor alcohol consumption from Friday.

In Wales bars have to close at 10pm, there is table service only and all food and drink has to be consumed at tables. Cases are rising rapidly in Wales and there is talk of following Scotland in shuttering bars in the worst-affected areas.

Northern Ireland which now has the worst rates of Covid-19 in either Britain or Ireland is now examining if further restrictions can be imposed, but wants funding from the Westminster government first.

United States (187 per 100,000) (14 day average to October 7th)
The United States remains an ongoing catastrophe from the impact of Covid-19 with president Donald Trump among dozens of high-ranking White House officials who tested positive for the disease. Restrictions in the United States are imposed at the State level and vary from state from state. There are prohibitions on bars and restaurants in most states at present.

Sweden 64.9 per 100,000 (14 day average to October 7th)
The poster child for a less stringent lockdown, Sweden is not reporting a second surge in cases. Its case numbers remain below the average for the rest of Europe. There is no mandate in Sweden to wear a mask though public gatherings and events can only have a maximum of 50 participants. Restaurants and pubs are open as usual though only those who sit at tables rather than stand at bars will be served.

Italy 48.7 cases per 100,000 (14 day average to October 7th).
Italy was one of the worst affected countries in the early days of the pandemic. After one of the strictest lockdowns in the world, it managed to get cases under control. However, it continues to remain vigilant and has just introduced the mandatory wearing of masks in all indoor and outdoor settings.

Germany 34 cases per 100,000 (14 day average to October 7th)
Germany has managed to contain the virus better than many large European nations and continues to do so, but there are spikes in Berlin and Frankfurt. In Berlin new restrictions limit private indoor gatherings to 10 people (down from 25) and bars and restaurants must close by 11pm. In Frankfurt masks are required in busy shopping streets, businesses must close by 10 pm and private indoor gatherings are limited to 10 people. Germany’s states have banned residents of domestic coronavirus risk areas from staying in hotels in other parts of the country.

Australia and New Zealand (Less than 1 case per 100,000)
Both countries have enviable rates of Covid-19 in comparison with Europe. Australia has started to open up all its bars and restaurants to almost normal service, but a strict international ban on travellers to the country remains in place and Australian citizens must get official permission to fly abroad. New Zealand, which has won universal praise for its handling of the pandemic, is now back to normal after a scare in early autumn when new cases were reported in Auckland. Auckland enjoyed its first day free of restrictions this week.

China (Less than 1 case per 100,000)
China, the country where Covid-19 began, appears to be, officially at least, clear of Covid-19. The country is in the middle of its Golden Week, an eight day national holiday and one of China’s busiest travel periods. Photographs from the Great Wall of China show it rammed with visitors, a sight that would unthinkable at present in many countries struggling with Covid-19. The country has returned to normal, but masks are still mandatory in many settings and there are severe restrictions on visitors coming to and leaving the country.