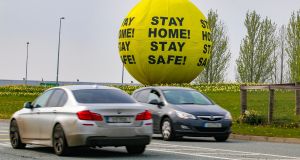 A third of voters believe the current level of restrictions is not sufficient to ‘safeguard the health of the population’. Photograph: Crispin Rodwell/ The Irish Times

Most people expect the pandemic to get worse and only a fifth of voters believe that the current restrictions are too severe, according to the latest Irish Times/Ipsos MRBI opinion poll.

A clear majority of voters (58 per cent) say that the Government is “doing a good job” managing the pandemic but that number has dropped sharply since the last poll which was taken in June, as the country was opening up.

The number of voters who say that the Government is “not doing a good job” has surged, from 9 per cent in June to 36 per cent.

Asked about their priorities for next week’s Budget, the pandemic also weighs on people’s views. Investment in the health service is the most popular choice for additional government spending, followed by investment in housing, schools, hospitals and other infrastructure. Given a list of choices where they believed additional spending in the Budget should be prioritised, “green initiatives” was the number one choice of only 4 per cent of respondents to the poll.

Voters also back the decision of TDs to vote in favour of the Dying with Dignity Bill on Wednesday night, which – if passed – will make it legal for someone to assist a terminally ill person to end their own lives.

The bill passed its first vote in the Dáil on Wednesday night, when TDs also rejected a Government amendment to stall its progress for a year to allow a special Dáil committee to consider the question of assisted dying.

The poll was taken Saturday-Tuesday, October 3rd to 6th, through in-home interviewing among 1,200 adults at 120 locations in every constituency. The accuracy level is estimated at plus or minus 2.8 per cent. This poll saw a return to the usual face-to-face methodology, after June’s poll was conducted via telephone interviews due to the pandemic.