Visors verdict? They don't work and may actually spread coronavirus 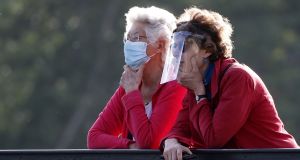 People who wear face visors instead of masks to protect themselves from Covid-19 may be putting themselves at greater risk from the illness with older people particularly vulnerable, one of the State’s leading virologists has warned. Photograph: Chesnot/Getty Images)

People who wear face visors instead of masks to protect themselves from Covid-19 may be putting themselves at greater risk from the illness with older people particularly vulnerable, one of the State’s leading virologists has warned.

Dr Kim Roberts of Trinity College in Dublin said that visors “do not protect people in any significant way” and are only useful if they are worn in conjunction with and not instead of face masks.

She pointed out that many older people have opted to wear face visors in recent months rather than face masks because they are perceived to be more comfortable and easier to manage and because they stop glasses fogging up.

“The real danger with that is that that wearing a visor may give a vulnerable person a false sense of security,” Dr Roberts said. “There are a lot of people who are wearing them to protect themselves even though none of the data suggests visors do that. They simply don’t do the same job as face masks.”

She also pointed out that while in some circumstances it might be beneficial for droplets carrying the virus to be directed downwards by visors, that can also be a significant negative, particularly in a restaurant setting if a server is standing either above a diner or above plates of food.

Dr Robert’s concerns about the increasing popularity of face visors instead of face masks and their ineffectiveness were echoed by UCD engineer Dr Kevin Nolan.

The academic has spent recent months working out of the Mater Hospital in Dublin deploying various technologies based around light, mirrors and lasers to display how far virus carrying droplets can travel and how long they can linger in the air.

He has also been able to demonstrate how effective or otherwise face coverings and visors are. “Face visors just don’t work,” Dr Nolan told The Irish Times.

Using what is known as Schlieren technology – a physics principle dating back more than a century which relies on high-spec mirrors and light to show the density of fluids and gases and the speed and distance they can move when people breathe, cough and sneeze – he has demonstrated that visors offer little or protection for a wearer.

“The way visors are designed mean that anyone wearing one can easily inhale the aerosols around them as the visors offer virtually no protection,” Dr Nolan said.

He also cautioned against people working in the hospitality sector wearing visors as they can direct droplets towards diners and onto food.

“It is probably better to use a visor than absolutely nothing but as the virus is transmitted via droplets or aerosols they can only ever offer very limited protection as it can travel under a visor and onto a person’s face,” Dr Jack Lambert, the professor of medicine and infectious diseases at the Mater Hospital said.

He pointed out that were no reliable studies which have pointed to the efficacy of visors in slowing the spread of Covid-19. He also stressed that he had not seen any data or recommendations from international health authorities suggesting that people use visors instead of face masks.

“What I do know is that we use masks in hospitals and having been doing so for a long time in order to prevent contamination. We know they work. The best thing, I would say, would be for someone to wear both a face mask and a visor.”

According to the HSE, for people who “find it difficult to wear a cloth face covering, it’s okay to wear a full face visor or face shield instead. They are not as good as wearing a face covering, but you’ll still get some level of protection,” the official advice says.