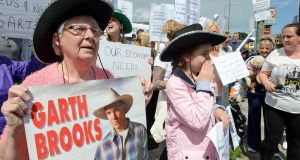 Marie Gorman (on left) ,Ballybough, along with local residents protesting against the cancellation of any of the Garth Brooks Croke Park concerts at Ballybough, Dublin. Photograph: Eric Luke/The Irish Times

A residents’ group representing people living close to Croke Park has said it is ‘prepared to consider a new direction’ with a view to facilitating the holding of the cancelled Garth Brooks concerts.

A statement from the Croke Park Community and Handball Centre, which had objected to the gigs, said members had met and “deliberated on the ongoing crisis” today.

“In the interest of all the Croke Park communities we are prepared to consider a new direction with a view to facilitating the holding of the Garth Brooks concerts,” spokesman Eamon O’Brien said.

He said the Lord Mayor of Dublin, Christy Burke, who had been “a central figure in the negotiations”, had agreed to bring the latest development to the attention of the various parties involved.

Brooks, meanwhile, is scheduled to hold a press conference in Tennessee at 5pm Irish time, at which he is expected to announce a world tour.

Earlier, Minister for Trade Joe Costello said Taoiseach Enda Kenny should be prepared to ring, or take a call from, the singer in order to resolve the impasse over the five cancelled concerts.

The council has been under intense pressure to help salvage the cancelled concerts planned for Croke Park later this month after Mr Kenny intervened in the debacle last night.

The American country singer cancelled the concerts after the council granted a licence for only three of them.

Speaking on RTÉ’s Morning Ireland, Mr Costello said: “I think everybody is desperate that these concerts should go ahead.”

But Mr Costello said there were planning laws in place and that these had to be obeyed.

The Minister said he always believed there was a solution to the problem of staging the five concerts and that solution was in the word “consecutive”. He said that if Brooks played three concerts, this would accommodate 60 per cent of the fans who had bought tickets.

He said if the singer was about to announce a world tour, which he is expected to do during a press conference in Nashville later today, there was “no reason he could not top and tail (the tour) with Ireland” to play another two dates.

Mr Burke said this morning the Mexican ambassador to Ireland had offered his help in the matter and that a group of residents from Ballybough in Dublin’s north inner citty intended to call for the assistance of US president Barack Obama.

“The Mexican ambassador contacted me yesterday and he offered his services at a diplomatic level if he could be any help and I had a group of residents from Ballybough who said they intend to call Mr Obama to try to encourage Garth Brooks to play in Dublin,” he said.

The Taoiseach is understood to have spoken by phone with mediator Kieran Mulvey. The Taoiseach is said to have ruled out emergency legislation when questioned last night at a regular meeting of the Fine Gael parliamentary party.

Brooks said yesterday he would still perform in Dublin if five concerts could be staged.

In an open letter to Peter Aiken, the concert promoter, Brooks said: “Our guys are still en route and if there is any chance that the five planned concerts can be salvaged and nobody is being let down then we can proceed as planned until the refunds begin.

“If you tell me, ‘Garth, thanks but it is over’ I will cease my efforts and bring our people and gear back to the States. If you think for any reason that the ‘powers that be’ in Ireland can fix this, then I will faithfully go to the last second.”

It said the “scale, magnitude and number” of concerts, with an expected attendance of in excess of 80,000 people per night over five consecutive nights, three of them being week nights, was “unprecedented” for the Croke Park stadium.