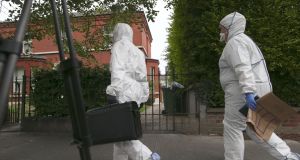 Investigators at the scene of a fatal stabbing that occurred at a mental health facility in Clontarf. Photograph: Stephen Collins/Collins Photos

Gardaí have arrested a man and sealed off a crime scene at a property in Clontarf, north Dublin, after a man was killed in a stabbing early on Thursday morning.

The fatal attack occurred at about 7.15am at a house on St Lawrence Road, Clontarf.

The property where the attack occurred is not a private residence and is a facility for people under medical care for mental health issues.

“A man, aged in his 20s, has been pronounced dead at the scene. The scene is currently preserved for a technical examination,” gardaí said.

“A man, also aged in his 20s, has been arrested and is currently detained at Clontarf Garda Station under Section 4 of the Criminal Justice Act 1984.”

Gardaí are now trying to establish if a dispute broke out between the two men or if mental health issues were a factor in the fatal attack.

A spokeswoman for the Health Service Executive (HSE) said the facility was a “low-support independent living residence” for mental health rehabilitation. The property consists of eight apartments, and residents have been moved to alternative accommodation, she said.

“The HSE are providing supports to family and residents and are actively reviewing and responding to the incident in line with the HSE incident management framework,” she said.

St Lawrence Road is an affluent area on Dublin’s northside, stretching from the Clontarf seafront up to the Howth Road. The leafy suburban road consists mainly of large red brick homes with long, well-kept front gardens.

Nial Ring, who lives on the road and is a councillor on Dublin City Council, said local residents were “in shock” following the killing. He said the mental health facility had been in the community “for a long long time” and was “hugely integrated” in the area.

“I’ve been living here for over twenty years, we would know people who work in it, we would know the residents, they’d be walking up and down to the shops, we talk to them, they were just part of the community,” he said.

“It really has been here for so long that nobody really takes notice, it’s just another house on St Lawrence Road,” he said.

James Finnegan, who lives in an apartment block beside the property, said he was surprised to hear there had been a killing on what he called “millionaires’ road”.

“Nothing happens around this area, I’ve been here for three years, but it’s still a tragedy wherever it happens. I doubt there’s ever been a murder on this road,” he said.

Anne Keating was walking her dog down the road on Thursday morning, as she does every day. Living in the area for 26 years she said the residents of the facility “generally keep to themselves”.

When she woke up to the news of the fatal stabbing she said she was shocked, but added “these things happen everywhere”.

Al O’Donohue (87) has lived on the road for over 40 years, and only learned of the “terrible” killing when he passed the property on his afternoon walk.

“To hear that somebody was stabbed on the road, most of the houses are families, no problems at all, it’s a lovely leafy road,” he said.

The residents in the facility “never gave any problems, we were never disturbed by them and we never interfered with them of course,” he said.

Another local, Aisling Rogers, who walked around to the scene on her lunch break, said she was “shocked for it to happen in a real posh area” like Clontarf.