Relocation clause in contract proposal makes no sense to nurses 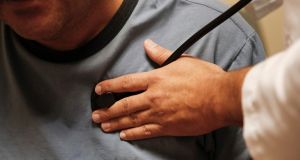 The INMO is expected to argue seeking nurses to relocate up to 40km is not feasible and would discourage recruitment. Photograph: Patrick T Fallon/Bloomberg

To get across Dublin city from, for example, St Vincent’s University Hospital on the southside to Beaumont on the northside or to Connolly in the west could take 30 minutes at a quiet time of the day. At rush hour, it could take double that or even more.

With that in mind, nursing organisations are asking why would the Government be looking for a provision in a controversial new contract that would allow nurses working in Dublin to be moved between locations on opposite sides of the capital during a single shift, given the practical difficulties that may present.

Nursing unions and public service management will on Tuesday attend the Labour Court in a bid to resolve differences on a new contract which have complicated and could even threaten the proposed settlement to the recent nurses’ strike.

The introduction of a new contract formed a key element of the original Labour Court recommendation that led to the suspension of the strike.

Nurses had been seeking pay parity with other graduate-entry groups such as physiotherapists who, they maintained, earn about €7,000 a year more.

Under the proposals, a new enhanced nurse grade would be introduced to which nurses could migrate after three years. Those moving on to the new grade would receive a salary increase of €2,439 or 7.3 per cent. The deal would also see significantly more nurses qualifying for additional allowances. However, there were also to be new cost-saving measures in a new contract to offset the cost of the proposed deal which could run to €50 million by the end of 2020.

The Irish Nurses’ and Midwives’ Organisation (INMO) initially urged members to back the Labour Court recommendation. However, when the Government’s contract proposals were leaked, they caused consternation.

The Irish Times reported at the beginning of March that the Government wanted provisions to transfer nurses between locations – potentially within a 40km radius – for weeks at a time or even within a single shift.

The INMO had seen the new contract as a potential opportunity to modernise nursing practices. However, it contended the Government proposals would actually worsen existing working arrangements.

The proposals were rejected by both the INMO and Siptu.

While Government representatives agreed to some changes in the proposals during direct talks with unions and at the Workplace Relations Commission, they insisted on retaining provision for the roster reforms and to move nurses between locations.

This is the impasse that the Labour Court will seek to break this week.

The question as to why the Government has insisted on such controversial changes which potentially could jeopardise an overall agreement has been debated widely in industrial relations circles in recent weeks.

Some believe the Government’s target in its contract proposals is not actually the nurses but rather the wider public service trade union movement.

From the start of the process, the Government was determined a settlement to the nurses’ dispute would not cause a breakdown in the existing public service accord, leading to a pay free-for-all across the State sector.

However, the other public service unions have so far held off on launching their much-anticipated knock-on claims. But they have not gone away. They are watching developments very carefully to see how any eventual nurse settlement plays out.

So what will the nurses have to give in productivity or work-practice changes in return for additional payments?

Some senior industrial relations figures believe the Government is sending a message to the broader public service union movement that if they seek more money outside the terms of the current accord, it will come at a price of work-practice reforms that they may find unpalatable.

In the meantime, the INMO is expected to argue that seeking nurses to relocate up to 40km is not feasible and would, in essence, discourage recruitment when the health service badly needs to attract more staff and hold on to those it already has.

The union is also understood to be greatly concerned at the proposed roster changes. At present, there are two main shift arrangements for nurses, a 7.8-hour day and a 13-hour day (of which they are paid for 12).

It is understood the INMO is worried that if new proposals were written into a contract, it could lead to staff having to attend hospitals or other workplaces more frequently – with implications for family or childcare arrangements in a predominately female workforce – or even to the introduction of split shifts where the working day is divided into two or more parts.