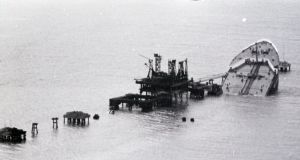 Explosion at the Gulf Oil terminal at Whiddy Island, Bantry, Co Cork, in which 51 people died as the French tanker The Betelgeuse unloaded its cargo. Photograph: Paddy Whelan 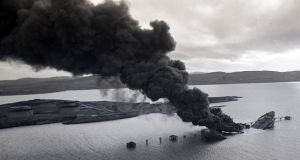 An aerial view of the wreck, showing Widdy Island and Bantry Bay and the remains of the oil jetty. Photograph: Paddy Whelan 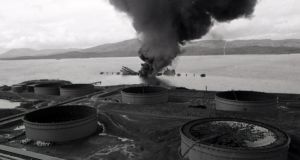 Oil storage tanks close to the jetty which was destroyed when the Betelgeuse exploded. Photograph: Pat Langan 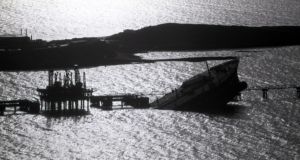 The Betelgeuse sinks after a huge explosion within its hull in Bantry Bay. Photograph: Paddy Whelan

Michael Kingston had just celebrated his fourth birthday the day before his father, Tim, was killed in the Whiddy Island terminal disaster on January 8th, 1979.

Kingston Snr died along with six other locals as well as an English cargo surveyor and 42 crew from the French oil tanker, the Betelgeuse, after it exploded in a ball of flame.

Now a leading maritime lawyer, Kingston is hoping the commemorations to mark the disaster at the terminal owned by Gulf Oil 40 years on will highlight the need for better marine safety standards.

“The Betelgeuse disaster is the leading example of the failure to implement regulation,” says the now London-based Kingston, originally from Goleen in west Cork.

The 121,000 tonne Betelgeuse, which was owned by French company Total SA, had arrived in Bantry Bay on January 4th, 1979, from Ras Tanura in the Persian Gulf with its cargo of crude oil.

Having completed berthing at the offshore jetty in about 30m of water by 8pm on January 6th, the Betelgeuse’s crew began discharging 114,000 tonnes of mixed Arabian crude oil shortly before midnight.

The work should have taken 36 hours. Instead, about 1am on January 8th, a rumbling or cracking noise was heard deep within the vessel, followed shortly by a huge explosion within its hull.

The Betelgeuse became engulfed in a ball of fire before a series of further explosions followed, lighting up the west Cork sky as far away as Dunmanway, nearly 30km away.

The Betelgeuse broke in half. The concrete unloading jetty crumbled. When the toxic smoke and fumes finally cleared days later, the 42 crew were gone, along with the seven locals and the English cargo surveyor.

Dutch diving supervisor Jaap Pols, who died during the salvage operation, will also be remembered, when the tragedy is commemorated in west Cork next week.

The Mayor of Co Cork, Cllr Patrick Gerard Murphy, and the French-Irish Association of Relatives and Friends of the Betelgeuse will attend a memorial service at St Finbarr’s Church in Bantry at 11am on January 8th before a wreath-laying ceremony at the memorial at the Abbey Cemetery near the town.

In it, Mr Justice Costello identified three key failures that led to the disaster: the Betelgeuse was in poor condition, with cracks, corrosion and leaks in its hull and tanks. Total SA was responsible, he ruled.

The French oil company was also responsible for incorrect unloading procedures and ballasting which led to strains in the hull’s buoyancy because of uneven pressures.

Emergency services at Whiddy and on the Betelgeuse were inadequate and poorly maintained, said the judge, who laid the blame for same jointly at the doors of both Total SA and Gulf.

Preparing to remember his father and the others lost, Michael Kingston is clear about the message that should emerge from next week’s commemorations.

“The message we want to go out from this commemoration is simple – use best practice and implement regulation to protect our seafarers and protect our environment.

“The Betelgeuse is one of the saddest stories of a tragedy at this time of the year where so many people died far from home,” said Kingston, who has featured in Lloyd’s List of Top 100 Most Influential People in Shipping.

Forty years ago, the International Maritime Organisation’s Convention of the Safety of Life at Sea warned that tragedies such as the Betelgeuse “lay on government shelves – it’s a stark reminder of what happens if we do not act”.