Eoghan Murphy: 'Pace still too slow... further changes will be required, nothing too drastic or too dramatic' 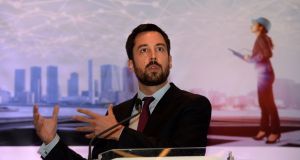 Further changes will be required to solve the current housing and homelessness crisis but these measures won’t be “too drastic or too dramatic”, Minister for Housing Eoghan Murphy has said.

Separately, the Minister said the Government’s new Land Development Agency (LDA) was needed as “State land is not being used efficiently in many parts of the country”.

Mr Murphy was speaking at the Construction Industry Federation (CIF) conference at Croke Park on Tuesday.

He said figures from the CSO indicate that reforms that have been made under the Government’s action plan on housing, Rebuilding Ireland, “are starting to deliver”.

“But we know that pace is still too slow in parts of the country and also in some aspects of the system. So further changes will be required, nothing too drastic or too dramatic because quite radical measures have already been introduced and are working,” he said.

Mr Murphy said the LDA, which will buy private land adjoining existing prime sites held by State and semi-State organisations in order to assemble land holdings that will then be developed for housing, would not be a vehicle to give State land to developers.

“This is about the State developing the land, it being the developer and capturing the value enhancements and delivering housing needs for its citizens; bringing forward public land for use for social housing, subsidised housing and general housing,” he said.

Mr Murphy said the LDA was “something that should have been done decades ago”.

“We already have eight sites across the country, large State sites that will come in now to the Land Development Agency’s portfolio to deliver initially at least 3,000 homes but building very quickly the 10,000 homes in terms of negotiations that are already under way.

“All Cabinet Ministers have agreed that land from their own departments will be brought forward at a Cabinet meeting at the end of October,” he said.

Mr Murphy said planning for some of the sites had already begun with the first houses due to be delivered in 2020, and that the LDA would be in existence for the next 15-20 years.

John O’Connor, chief executive of the Housing Agency, said one of the greatest challenges facing the housing sector was developers’ focus on three- and four-bedroom houses.