Those with diabetes already diagnosed with cancer also face a 29 per cent higher chance of dying following a prostate cancer diagnosis than those without diabetes, report finds 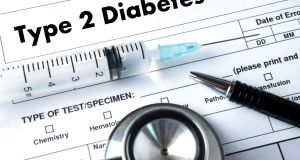 ‘Diabetes and cancer share certain risk factors that might contribute to these associations . . . obesity, smoking and diet are examples of likely key factors.’ Photograph: Getty Images

Having diabetes is linked with an increased risk of developing a number of cancers as well as poorer survival following a cancer diagnosis, according to a large-scale European study.

With the number of people with type 2 diabetes doubling globally over the past 30 years – a trend that is set to continue –the findings have significant implications because of increased cancer incidence, the researchers conclude.

The research, which was presented at this year’s European Association for the Study of Diabetes annual meeting in Berlin on Tuesday, compared more than 450,000 people with type 2 diabetes with more than two million without the condition, over an average of seven years.

For the most common cancers, individuals with diabetes face a 20 per cent greater risk of developing colorectal cancer and a 5 per cent higher risk of breast cancer compared with their diabetes-free counterparts, the study finds.

People with diabetes already diagnosed with cancer also fare worse, with a 25 per cent and 29 per cent higher chance of dying following a breast and prostate cancer diagnosis (respectively) than their peers without diabetes.

More than 415 million people are living with diabetes worldwide – equivalent to one in 11 of the adult population – a figure expected to rise to 642 million by 2040. Previous research has suggested a link between type 2 diabetes and an increased risk of cancer but the relationship remains poorly understood.

To provide more evidence, a team led by Dr Hulda Hrund Bjornsdottir from the Swedish National Diabetes Register examined cancer incidence in individuals with type 2 diabetes between 1998 and 2014. A total of 227,505 people developed cancer over the follow-up period. Diabetes was associated with 11 out of the 12 specific types of cancer investigated.

For those with diabetes, mortality was higher for prostate (29 per cent higher), breast (25 per cent), and colon (9 per cent) cancer compared to their diabetes-free counterparts.

“Our findings do not suggest that everyone who has diabetes will go on to develop cancer in later life,” Dr Bjornsdottir said. “Diabetes and cancer share certain risk factors that might contribute to these associations including obesity, smoking and diet are examples of likely key factors.”

She added: “Our findings underscore the importance of improving diabetes care. Eating a healthy diet, getting plenty of exercise and maintaining a healthy weight are important factors in diabetes prevention and furthermore cancer prevention.”