Flash floods lead to traffic chaos across the country, with bitterly cold conditions to come

There is a ‘status yellow rainfall warning’ in operation in Munster and Leinster with flooding and severe traffic disruption resulting from heavy overnight rainfall. 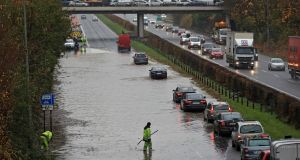 Heavy flooding on the N3 at Junction 2, Blanchardstown Centre on Wednesday afternoon after heavy rain caused the River Tolka to burst its banks. Photograph: Colin Keegan/Collins

Heavy rain caused flash flooding and road closures across the country on Wednesday.

Flooding was reported across the east, with an elderly woman being helped from her flooded home in Mountmellick, and a man being rescued from a car in Dublin.

The heaviest rain fell in the Dublin region, with 47.4mm of rain falling in Dublin airport up to 3pm, 8.4mm of that falling between 7am and 8am.

Dublin Fire Brigade said it had been called out to a number of incidents. The Clontarf Road and Infirmary Road were closed for a time. Flooding was also reported on James Larkin Road, Rock Road and Beresford Place.

Heavy flooding in the left lane of the M4 westbound at Maynooth caused traffic tailbacks.

Clonaslee village was one of the worst hit, with motorists urged to avoid the area in the early afternoon.

There were delays on the N80 between Portlaoise and Stradbally.

In Co Kildare, several roads were impassable, with Dara Park in Newbridge one of the estates affected. Residents appealed for help and the provision of sandbags, and claimed that raw sewage was flowing through the estate.

In Co Limerick, two crashes on the N18 brought traffic to a standstill, while cars were trapped in serious flooding on the N69 in the Foynes and Shanagolden areas.

There was extensive flooding across Co Kerry following overnight rainfall, and gardaí urged motorists to drive with care.

Met Éireann said it will get progressively colder during Thursday, with daytime temperatures of between 5 and 9 degrees.

Temperatures will fall overnight on Thursday to minus 3 degrees in places as cold air comes in from the polar region. Friday and Saturday are to be bitterly cold, with frost and ice.

Meanwhile, the cost of insurance claims arising from Storm Ophelia is expected to be in the region of €50 million, according to Insurance Ireland.

Three people were killed and hundreds of thousands of homes and businesses were left without electricity after last month’s storm, which Met Éireann described as the most powerful waether event to hit Ireland in half a century.

The industry body’s estimate of the damage claims triggered by the storm is considerably lower than the €500 million-€800 million some experts had predicted in the immediate aftermath.

“There is a high volume of claims but they are of relatively low value,” a spokesman said. “This is due to most claims arising from wind damage and the absence of widespread flooding.”

Insurance Ireland’s estimate, which is preliminary, is less than half the €111 million in successful insurance claims arising from Storm Darwin, which hit Ireland 3½ years ago.

The relatively low estimate of claims will allay concern the storm will result in increased premiums for consumers.

Insurers in Ireland have paid out more than €1.1 billion to policyholders over the past decade for claims stemming from severe weather events, including storms and flooding.

Since 1980, the cost of natural catastrophes globally has grown by $870 billion in real terms, and 2011 was the second-costliest year on record.

Insurance companies are struggling to get to grips with the frequency of extreme weather events, which have been linked to climate change.

Already in the US, insurers have developed new products to handle claims and avoid huge losses arising from single climate events.