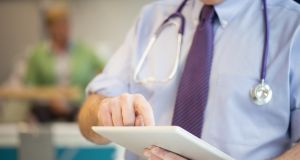 Public hospital consultants, who should be working a maximum of one day a week in private care, are working two to three times that amount, according to the investigation. Photograph: iStock

Taoiseach Leo Varadkar has suggested that hospital consultants should have to clock in to work to ensure they are doing the job they are paid to do, and not in private hospitals.

He made the remark following revelations on the RTÉ Investigates programme that a number of consultants are engaging in more private practice than their HSE public contracts permitted.

The Taoiseach said “the practice is deeply offensive and it must change”.

Mr Varadkar noted that there was controversy when TDs were required to clock in to ensure it was known they were in Leinster House.

“I do not think it would be a huge imposition on our hospital consultants to clock in so that we at least know they are on the premises and are not in private hospitals when they should not be.”

Mr Varadkar also said that an audit he had sought as minister for health to see how many patients accident and emergency consultants saw “was never done” to his knowledge, before he moved on to the Department of Social Protection.

“Perhaps it was done subsequently. I will check up on that.”

The Taoiseach was not surprised at the outcome of the programme because “there has been anecdotal evidence for a long time in the health service of a minority - perhaps not a majority - of consultants not fulfilling their contractual obligations”.

Earlier, Minister for Health Simon Harris said consultant doctors who took more private patients at the expense of their public patients were being brazen, immoral and unfair,

According to the RTÉ investigation, public hospital consultants who should be working a maximum of one day a week in private care are working two to three times that amount.

This is causing longer delays for many patients in the public system, some of whom have to pay to go private to get seen within a reasonable timeframe by the same doctor in the same hospital.

Some hospitals currently have a four year waiting list for public surgical procedures.

“I can only describe the behaviour highlighted by last night’s RTÉ Investigates programme, as brazen, immoral and unfair. Some consultants behaving this way brings the system into disrepute and lets down a lot of their colleagues, who go above and beyond every day caring for patients and often work well beyond the hours required under their contracts,” Mr Harris said.

“We cannot have a situation where people are paid for hours and don’t do them. This would not be tolerated for nurses or other grades in the service.”

He said a formal investigation is being launched in the controversy.

The HSE defended its handling of the public/private system on Wednesday. It said that 80 per cent of patients seen by consultants should be public, as per a 2008 contract. On a national scale this target is being met, with 82 per cent of in-patient procedures and 85.8 per cent of day patient being public, the HSE said.

“National performance has been consistent at this level.”

However it acknowledged RTÉ has detailed a number of cases where consultants are taking on more private patients than they should be.

“The HSE expects all consultants to adhere to the requirements of their contract. Not doing so is unacceptable and each Hospital Group is required to monitor and ensure the contracted public hours are being delivered by consultants,” it said in a statement.

It said the monitoring of how many public and private patients are seen is a complex task. Sometimes a consultant fulfils their 80 per cent commitment by working across several hospitals within a hospital group.

The HSE said it has asked RTÉ Investigates to share any evidence it has regarding consultant non-compliance “so that it can be fully investigated and addressed as appropriate.”

It said it has not yet received any evidence from the broadcaster.

An Irish consultant now living and working in Canada said he was amazed it has taken so long for the issue of consultants’ hours on public patients to be revealed.

Paul McMullen told RTÉ’s Morning Ireland that a “sizeable minority” of consultants had been abusing the system for years.

He said he would hate to see the reputations of all consultants tarnished and that there are pockets of excellence within the Irish health system.

However, it was obvious some consultants are not fulfilling their obligations with regard to public patients, he added.

Dr McMullen said there was very little accountability within the Irish healthcare system with very poor governance of the public workload of consultants.

There are too many hospitals in Ireland, he added.

Dr McMullen compared the Irish health care system (where he worked for ten years) with that in Canada, specifically the district of Alberta, where he now works.

He said that the population of Alberta is the same as Ireland but there are only six hospitals, compared to 47 in Ireland. Patients might have to wait four weeks for a public appointment with a consultant in Alberta, they could have to wait 18 months in Ireland.

The spend on healthcare in Canada is less per head, he pointed out, but there are better outcomes.

A says that waiting times in Ireland for cataract surgery are scandalous for a first world country.

Consultant ophthalmologist Dr David Keegan called Irish wait times “scandal”. He said average waiting times for surgery in Ireland are six to 12 months, but in some parts of the country it can be up to four years for eye surgery.

He said the vast majority of consultants do a good job of balancing public and private patients, but admitted some work practices had developed out of a poorly funded health programme.

Consultants who exceed the hours in their contract could be sanctioned, he said, but he did not know of any who had been sanctioned.

He added that he did not think it was right for a patient to pay for private treatment in a public hospital and he had not been aware of that practice.

However, he acknowledged that in some parts of the country there are no private hospitals so consultants would have to operate in public hospitals.