Q&A: What is behind the new Panda recycling charge? 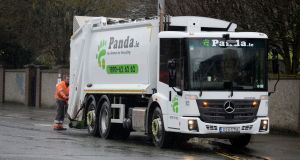 Panda is unlikely to be acting alone and other waste companies are probably going to pass on increased costs to their customers in the coming weeks. Photograph: Alan Betson/The Irish Times

We are being charged to recycle now?

We are. Or at least customers of Panda, the largest waste company in the State, is. It has announced it is going to roll out fees for mixed dry recyclables – typically disposed of in green bins – for more than 250,000 homes and commercial businesses from the middle of next month.

How much are they going to charge me?

That really depends on how much you throw away. It plans to introduce a charging system which will see people pay 80 cent per lift of their recycling bins and 4.5 cent per kg of waste in the bins

That is probably what Panda hoped you would say. According to the waste company, the annual cost of its green bin collection service will average €21 per customer. But some of those who have contacted this newspaper fear their annual charge could be more than four times that amount.

But if these people are paying more, is that not simply because they are generating more waste?

Yes. And it can certainly be argued – using the basics of the polluter pays principle – that charging those who generate the most waste – be it recyclable or not – the most is entirely justifiable. It is one way to get people to generate less waste.

Why is Panda introducing the charge now?

They are blaming the Chinese – or at least that country’s ban on plastics and mixed paper since January.

Why should what China does matter to us?

It matters quite a bit. For many years China has been the main processor of recyclables from all over the world. But it recently stopped accepting our rubbish and that has seen the cost of recycling climbing and the value of recyclable materials falling. That hits waste management companies bottom lines.

Companies? I thought you said it was just Panda?

It is, but while Panda has a dubious first mover advantage here it is unlikely to be acting alone and other waste companies are most likely going to pass on increased costs to their customers in coming weeks. The chair of the Household Waste Collection Price Monitoring Group, Frank Conway, said as much on Wednesday afternoon when he said the decision by China to close its doors to plastic waste posed a challenge to all waste management companies. He said it would be difficult for any company to avoid imposing green lift charges in the weeks and months ahead.

How much will they charge?

It is difficult to say. There are dozens of companies operating across the State and they all operate in different charging systems.

Why are we relying on China? Why don’t we have our own State-run recycling facilities?

Why indeed? Rather than exporting our rubbish to countries far away we might be better off dealing with it ourselves but while some companies – including Panda – are looking to invest in such processing plants, the State does seem reluctant to get involved.

Remind me again what goes in the recycling bin?

Newspapers, books, magazines, cardboard, cereal boxes, plastic bottles, plastic containers, tin cans and aluminium cans are fine. Some hard plastics are fine. Some plastics bags are not. Wet paper or cardboard is problematic and any otherwise recyclable box that has food on it cannot be recycled.

How can I best reduce the cost?

The simple answer to that is by recycling less. And by that we mean by generating less waste. Buying loose fruit and vegetables, using refillable receptacles for water and coffee, buying more environmentally friendly and refillable cleaning products and generally turning up your nose at packaging that you believe to be unnecessarily excessive is key.

Will this put pressure on shops to stop encasing so much of their products in materials we will have to pay to recycle?

Hopefully it will. A huge volume of the material that will end up in the typical recycling bin comes from products bought in supermarkets. Rather than complaining about the cost of recycling, consumers would be better off making a concerted effort to reduce the amount of recyclable material that comes into their home. They would be better able to do this if they had more support from retailers.