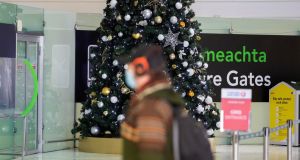 It is expected the Government will allow people to visit the homes of their friends and family over a two-week period near Christmas next month, Tánaiste Leo Varadkar has said.

A phased easing of lockdown restrictions over the month of December will be announced by the Government on Friday. This will likely include a relaxation of limits on travel between counties and household visits later in the month, to permit people to celebrate Christmas.

In Northern Ireland and the rest of the UK, up to three households will be allowed to meet during a five-day Christmas period between December 23rd and December 27th.

Speaking on Wednesday, Mr Varadkar said the Government hoped to introduce a similar measure to allow household visits “for something closer to two weeks” in the Republic.

At present, the expectation in Government is that limits on home visits would then need to be reimposed after the holiday period.

“A date would then kick in in January where restrictions would be tightened again, but again that’ll depend on the numbers. We won’t reimpose restrictions just for the sake of it, we’ll only reimpose restrictions if the virus is taking off again,” Mr Varadkar said. “It is the Government’s objective to have family dinner, Christmas day, as normal as possible.”

Mr Varadkar said he hoped the country would not need to introduce a Level 5 lockdown again, but added “it is not possible to rule that out.”

“We saw it in Germany and Italy, countries that had a much lower incidence than us, the virus suddenly taking off in the course of a week or two, so it’s not possible to rule out a return to Level 5 at some point next year,” he said.

However, he said the Government would look to avoid any protracted nationwide lockdown lasting several weeks. “If it does happen at all, we would intend it to be much shorter, more like two or three weeks than the six than we’ve experienced,” he said.

Restrictions are to be eased in phases next month, with shops, hairdressers, hotels, and museums expected to be allowed reopen at the start of December.

“Obviously we would like to do the maximum reopening from next week but we think that that is not safe,” Mr Varadkar said.

“The things we’ll do towards the start are the things that we know to be safer, opening the shops, opening the gyms, allowing people to get their haircuts.”

The easing of restrictions on “higher risk settings” where people congregate, such as the hospitality sector, sports settings, and homes, would take place later in the month, he said.

No final decision had been made on when restaurants would be allowed to reopen, and the Cabinet would decide the final plan on Friday, following further advice from the National Public Health Emergency Team, he said.

Mr Varadkar denied that a phased relaxation of measures would be confusing for people. “We are going to try as much as possible to keep the rules simple and straightforward,” he said.

“When you have too many rules it is actually very easy to make a mistake and break the rules without even realising it, especially when they change all the time, or if they vary from place to place,” he said.

The Tánaiste and Minister for Enterprise was speaking at an event in Grand Canal Dock, Dublin city, calling for people to support local businesses when shopping this Christmas.