Air pollution thought to be responsible for 1,300 premature deaths in Ireland in 2019 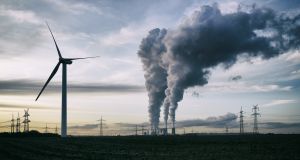 The main threat to air quality comes in the form of minute particles in air which are known as PM2.5. Photograph: iStock

Public consultation on Government proposals to introduce new air pollution controls are due to close at 5:30pm on Friday.

The main threat to air quality comes in the form of minute particles in air which are known as PM2.5. These arise mainly from solid fuel burning, according to the Environmental Protection Agency (EPA).

Air quality in Dublin, and a range of rural towns including Ennis, Tralee, Cork city, Macroom, Letterkenny and Enniscorthy, has been consistently found to significantly breach World Health Organisation levels for PM2.5 particles.

Such particles arise from burning smoky coal, turf and, in particular, wood that has a moisture content of more then 18 per cent, according to the EPA.

The Department of the Environment, Climate and Communications is now planning an update to the National Air Pollution Control Programme and is seeking the views of environmentalists and the fuel industry, among others.

Environmental campaigners Friends of the Irish Environment said it was concerned that the consultation on the original programme “was dominated by groups with interests in limiting efforts to address air pollution”. A spokesman said the programme had previously failed to ensure a reduction in harmful emissions.

The environmental charity has now published a “primer”, a short document prepared to encourage engagement by members of the public, on its website.

The document gives a quick introduction to the programme, the major sources of the pollutants addressed by the plan, and the health impacts of air pollution in Ireland.

The body added however that there was “no estimate of the impact of indoor air pollution, which can reach much higher levels due to a lack of airflow and which affects women and children disproportionately”.

Burning smoky coal was banned in Dublin in 1990 in a move that caused air pollution levels to fall by 70 per cent in the city and, since then, it has been estimated that 8,000 fewer people have died from heart- and lung-related diseases.

However, importers of non-smoky fuels have said the ban should be extended State-wide and warned large amounts of smoky fuels were being imported across the Northern Ireland Border. Air pollution figures for Letterkenny in particular are abnormally high in comparison to most of the rest of the country.

A spokesman for the “low smoke” fuel industry said there was no doubt that “if you could stop the burning of smoky fuels you could eliminate air pollution”.

The Irish Times reported in December that air pollution in Dublin was back to levels not seen since before the ban on smoky coal was introduced 30 years ago.

Data showed pollution levels in Rathmines and Ringsend were up to 15 times higher than European Union and World Health Organisation limits.

World Health Organisation guideline values for air quality were exceeded at 33 EPA monitoring stations, according to its latest report. The EPA said this was “mostly due to the levels of fine particles in our air”.

Levels are particularly high during the winter months when elevated use of solid fuels such as coal, turf and wet wood impacts negatively on air quality, especially in towns and villages. Further information at gov.ie