Covid-19: Europe warned to prepare for surge in deaths due to British variant 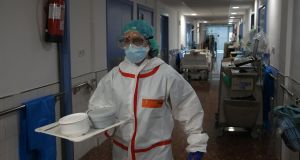 A healthcare worker is pictured in the Covid-19 wing of the Hospital Del Mar in Barcelona, Spain. Health systems around Europe have been urged to prepare for a surge in hospitalisations and deaths due to the spread of the more infectious British variant of the disease. Photograph: Lluis Gene/AFP via Getty Images.

Health systems around Europe should prepare for a surge in hospitalisations and deaths due to the spread of the more infectious variant of Covid-19 that first emerged in Britain, the European Centre for Disease Prevention and Control (ECDC) has warned.

The health body warned that the risk associated with new mutations of the virus had increased to high or “very high”, in an assessment of the British, South African and Brazilian variants which was published on Thursday.

It urged national governments to prepare laboratories and healthcare systems “for a further escalation in demand” and laboratories for a surge in tests to process.

Contact tracing systems should also be reinforced, it warned, while greater compliance with existing restrictions is needed to curb the spread of the disease.

“National authorities should rather be ready to enforce even stricter measures, communicating and engaging with the population to encourage compliance,” the ECDC’s risk summary read.

It also recommended curbs on travel.

“In order to slow down the importation and spread” of the new variants, “non-essential travel should be avoided”, the health body urged.

Testing and quarantine requirements for travellers, particularly from areas where the variants are in greater circulation, should be maintained, it added.

Meanwhile, national vaccination programmes should ramp up to ensure protection for health workers and the most vulnerable against the disease, and “and hopefully also against one or all of the new variants of concern”.

The emergence of new mutations has raised concerns that variants that are resistant to vaccines may emerge before national vaccination programmes manage to curb the spread of the virus.

According to the ECDC’s 14-day chart of average Covid-19 infection rates, on which EU member states base their travel restrictions, Ireland now has the highest level of infections in the bloc.

More than 14 people in every 1,000 tested positive for the disease between the first and second weeks of January, according to the measure, putting Ireland nearly 29 times over the threshold for a ‘red’ zone in the ECDC’s traffic light system.

Testing data suggests that the new British variant has become widely prevalent in Ireland, accounting for more than 45 per cent of infections. Instances of the variant have also been detected in other member states and there has been community transmission of the mutation in Denmark, according to the ECDC.

Ireland’s post-Christmas spike in infections caused concern around the EU about the potential for the new variant to cause a similar surge in other countries, and has fuelled calls for tighter travel restrictions to slow its spread.