Coronavirus search: See how Covid-19 is spreading in your area 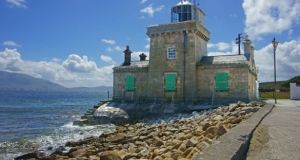 Blacksod Lighthouse on the Belmullet peninsula, Co Mayo. The Belmullet electoral area has the highest rate of Covid-19 in the State. Photograph: iStock

The Co Mayo town of Belmullet continues to have the highest rate of Covid-19 infection in the State, followed by Enniscorthy in Co Wexford and Dundalk in Co Louth.

The disease is spreading in Belmullet at a rate more than four times higher than the national average, according to new figures.

Some 700 people from the population of 12,600 had tested positive for the virus in the last fortnight, providing an incidence rate of 5,555. The national incidence rate currently stands at 1,334 cases per 100,000 people.

The rate at which the virus is spreading in Belmullet has eased slightly, down from an incidence of 6,031 per 100,000 last week. The area has had the highest rate of Covid-19 in the State for the last number of weeks following a sharp surge of cases in the locality after Christmas.

The latest data from the Health Protection Surveillance Centre (HPSC), published on Thursday, examines the 14-day incidence rate of Covid-19 up to January 18th in each of the State’s 166 electoral areas. The data is published on the Government’s Covid-19 Data Hub every Thursday night. Here, we put the figures in a searchable table so you can check your area and compare it to other local electoral areas in the Republic. If you are reading this on The Irish Times app, go here to search.

Enniscorthy had the second highest incidence rate with 3,291 cases per 100,000 people in the two weeks up to January 18th.

The Dundalk south local electoral area had the third highest, with 961 cases in the area resulting in an incidence of 2,962.

Border counties such as Monaghan continue to see high rates of the virus, with incidence rates in the Ballybay-Clones and Carrickmacross-Castleblayney electoral wards among the 10 hardest hit areas.

A number of areas in the southeast of the country, which previously had seen relatively low rates of Covid-19, are now among the locations where the virus has spread quickest. Tramore-Waterford city west had an incidence of 2,789, the fifth highest in the State.

The Waterford city east ward had an incidence of 2,301, with 529 cases among a population of 22,987, giving the area the tenth highest incidence rate in the country.

Conamara north had the lowest level of Covid-19 in the State, with 70 cases in a population of 17,191 resulting in an incidence of 407.