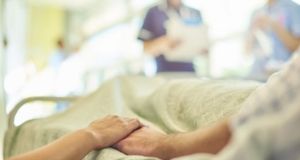 The INMO said it envisaged that any strike action would involve a 24-hour stoppage in all hospitals.

Psychiatric nurses are seeking the Government to agree a special pay increase as a “down payment” to encourage members to take part in an overall salary review.

The general secretary of the Psychiatric Nurses Association (PNA), Peter Hughes, said the Department of Health and HSE representatives had said they would respond to his union’s proposals on Tuesday.

He said any downpayment would have to be fairly substantial.

Mr Hughes also said psychiatric nurses were seeking a process to secure pay parity with other degree-entry grades such as physiotherapists.

Psychiatric nurses have said unless health service management table “vastly improved” pay proposals, they will have no choice but to ballot for strike action.

Mr Hughes, said his members considered Government pay proposals to be “insignificant “ and had rejected them by 95 per cent.

He said the Government proposals went nowhere near tackling recruitment and retention problems in the mental health service.

Arriving at the talks on Friday morning Mr Hughes said his members were frustrated and angry.

A special meeting of PNA executive will take place next Thursday to decide on its next steps.

The Irish Nurses and Midwives Organisation (INMO), the largest nursing union, expressed disappointment that no proposals were made at talks on Friday.

INMO General Secretary Phil Ní Sheaghdha said; “Nurses and midwives are immensely dedicated professionals and our concerns deserve to be taken seriously. We will not stand by while patient care is compromised due to understaffing. The HSE simply cannot hire enough nurses and midwives on these wages.

“In ten days’ time, our members will vote on whether to go on strike. This is not a decision that any nurse or midwife will take lightly.

“We have been clear with the HSE and Department of Health today, setting out the areas where they should focus in order to avert this dispute. We remain available for discussions each and every day until balloting begins.”

Earlier this week, the INMO, set the Government a two-week deadline to put forward “realistic” pay proposals or it would ballot members for strike action.

Arriving at the talks on Friday morning, Ms Ni Sheaghdha, said a strike was not necessary but the clock was ticking.

She said everything had been exhausted in the HSE’s attempt to tackle recruitment and retention issues with the exception of pay.

The INMO said it envisaged that any strike action would involve a 24-hour stoppage in all hospitals.

The trade union Siptu has accepted the pay proposals on behalf of its 4,000 nurse members.

Siptu health division organiser Paul Bell said he wanted to hear from management at the talks on Friday when the Government pay proposals would be implemented.

Nursing unions are to hold talks with health service management on Friday in an attempt to avert potential strikes in hospitals in the weeks ahead.

It said nurses and midwives would provide life-preserving care and operate emergency response teams for theatres and emergency departments in such circumstances.

The union said if the dispute remained unresolved the strike could escalate to two 24-hour stoppages in the week after the first day of industrial action.

However, any industrial action is unlikely to take place before mid-December at the earliest.

The executive of the Psychiatric Nurses Association is to meet next week to decide on whether it will ballot members for strike action in the wake of their rejection of the Government pay proposals.

The INMO had sought an across-the-board pay rise to deal with recruitment and retention problems in the health service.

However, the Public Service Pay Commission found there was no generalised recruitment and retention problem in nursing and midwifery although it highlighted localised difficulties.

In September, the Government – based on recommendations of the commission – put forward a €20 million package of measures aimed at dealing with recruitment and retention problems in some areas of the health service including increased allowances and faster access to promotion posts. The Government maintained between 18,000 and 20,000 nurses could benefit from the proposals.

Some nurses could also benefit from a separate Government initiative to address the two-tier pay system in the public service under which staff recruited since 2011 are paid less than longer-serving colleagues.

However, some nurses would benefit from neither of the Government’s new pay proposals.

She said at present nurses, although they had identical qualification requirements, were paid €7,000 less than these other groups – such as physiotherapists and speech and language therapists – and had a longer working week at 39 hours compared to 37 hours.

The warning of industrial action in hospitals come as the health service is facing increased pressure with the onset of winter.

The INMO said on Friday that there were 483 patients on trolleys in emergency departments in need of admission and on wards awaiting a bed.

It said Cork University Hospital had the highest levels of overcrowding with 57 patients on trolleys or on wards waiting for a bed.